Clarksville, TN – Junior Lauren de Castro, of the Austin Peay State University softball team, has been named the Copies in a Flash APSU Athlete of the Week.

de Castro opened the 2013 softball season with a complete-game shutout against East Tennessee State at Auburn’s Plainsman Invitational, Saturday. She scattered five hits and struck out two without allowing a walk, while going 3-for-3 at the plate with a triple and an RBI. 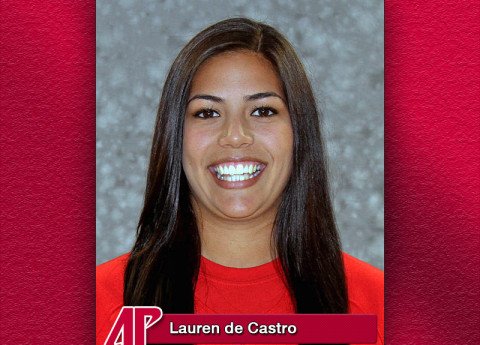 She also tossed a complete game against Furman, allowing just two earned runs and striking out four in the loss.

de Castro’s bat was a huge part of the Lady Govs offense. She led Austin Peay with a .545 (6-for-11) average at the Plainsman Invitational, and tied for the team lead with two runs scored. She finished the weekend with no errors in 16 chances in the field, splitting time between first base and the circle.