Clarksville, TN – Austin Peay State University women’s soccer team looks to extend its season-opening unbeaten streak to seven when it hits the road for a trip to upstate New York for matches against St. Bonaventure and Buffalo.

The Lady Govs face the Bonnies 6:00pm (CT), Friday, at McGraw-Jennings Field before making the trip north for an early Sunday (10:15 am CT) match against the Bulls at UB Stadium.

Austin Peay enters the weekend with a 4-0-1 mark, outscoring opponents 12-3 over the season’s first five matches. Eight of those goals have come in the second half, including four off the foot of senior Tatiana Ariza.

With such a stingy defense, it’s only logical that Austin Peay would have earned some weekly accolades from the Ohio Valley Conference. Senior Emily Kink made it twice in three weeks that a Lady Gov defender earned OVC Defender of the Week honors, taking this week’s honor two weeks after Shelby Olszewski won the season’s first honor.

The Bonnies enter the weekend at 1-3-1, winless since their August 28th 2-0 triumph at Canisius. St. Bonaventure had a tough draw at last weekend’s U.S. Naval Academy Invitational, taking Towson to a 2-2 draw and pushing Navy to overtime before falling 3-2. Senior Alyssa Lapp has provided much of the Bonnies offense, scoring three goals – including one in both games last weekend in Annapolis – and adding one assist.

Buffalo is 2-1-1, including a 2-1 victory against the Bonnies on August 30th. The Bulls have scored just three goals in 2013, but senior keeper Ainsley Wheldon has been exemplary in net. In addition to two shutouts, Wheldon has 15 saves (.833 save percentage) and a 0.71 goals-against average heading into the weekend.

Austin Peay has a long break before the OVC opener, getting next weekend off before hosting defending OVC Tournament champion UT Martin (Friday, September 27th, 7:00pm) and Southeast Missouri (Sunday, September 29th, 2:00pm) in the first weekend of conference play.

These matches will be uncharted territory for the Lady Govs. Not only has Austin Peay never played St. Bonaventure or Buffalo prior to this weekend, the Lady Govs will be the first OVC team to ever take the field against either squad.


Keep An Eye On 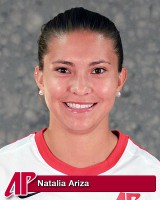 Senior Tatiana Ariza continues her assault on the record books. With two points this weekend, she would become the first Lady Gov with four single-season point totals residing in the top 10 in Austin Peay history. With 111 career points,

Ariza needs to average 3.2 points in the remaining 12 matches to tie Eastern Illinois’ Beth Liesen (2000-03) for most career points in OVC history with 149. 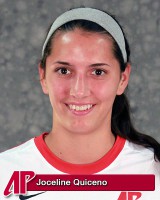 Senior Joceline Quiceno needs one goal to tie her sister Andy for eighth all-time in goals scored with 11.

A win or tie against St. Bonaventure would run Austin Peay’s unbeaten streak to six, which would be the best streak to begin a season in program history.

Be sure to follow all the Lady Govs action at LetsGoPeay.com, and check them out on Twitter (@AustinPeaySocr) and by liking the Austin Peay Women’s Soccer Official Page on Facebook. Live stats will be available prior to the match at www.LetsGoPeay.com.