It’s the first career weekly honor for Ademovic and the first for the Govs in 2014. Dimitar Ristovski and Sean Bailey each brought home a Player of the Week award last season in Austin Peay’s run to the OVC Championship. He shares the honor with SIU Edwardsville’s Nicolas Vincent. 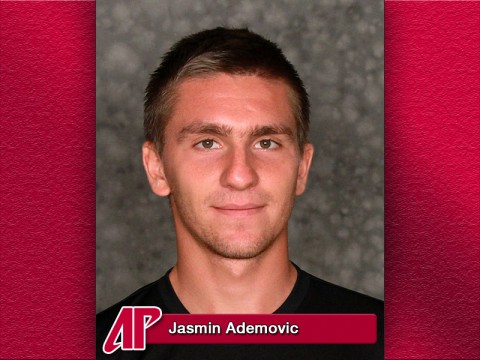 Ademovic showed no ill effects in his return from an ankle injury that kept him sidelined for the better part of a month. The Bosnian knocked off Jacksonville State’s Pedro Wagner at No. 1 singles (5-7, 7-6, 6-4) and teamed with Aleksas Tverijonas for an 8-7 (8-4) win at No. 1 doubles over Jaryd Reese and Jeff Wendler-Filho.

A three-time All-OVC first-team selection, Ademovic has never lost a singles match to Jacksonville State in his four years as a Gov.

Ademovic and the rest of the Govs have a busy week ahead, traveling to Middle Tennessee for a non-conference match (2:00pm, Thursday) before returning to OVC play at Belmont (10:00am, Saturday) and Tennessee State (1:00pm, Sunday) this weekend.