Gold Star Family members along with Lifeliner Soldiers took a moment in time to reflect, honor and cherish the memory of these heroes. The ceremony commenced after nine bricks, representing each Soldier and engraved with their names, were laid at the base of the Lifeliner Memorial Monument.

“The Soldiers we are honoring today are true heroes,” said Col. Charles R. Hamilton, commander, 101st Sustainment Brigade “Lifeliners,” 101st Airborne Division (Air Assault). “They gave years of their lives serving, with the understanding of the commitment it takes to defend our beautiful country – and they did this as volunteers. They ultimately gave their lives protecting what all of us here value the most.”

In honor of this special observance, members of the Sergeant Audie Murphy Club had the privilege to carry and neatly place the bricks at the Lifeliner Memorial Monument in front of the brigade headquarters.

Each name was called off as their brick was laid:

“These bricks and the names inscribed on them are forever set in stone. They symbolize our commitment to always remember our brothers and sisters in arms,” Hamilton said. 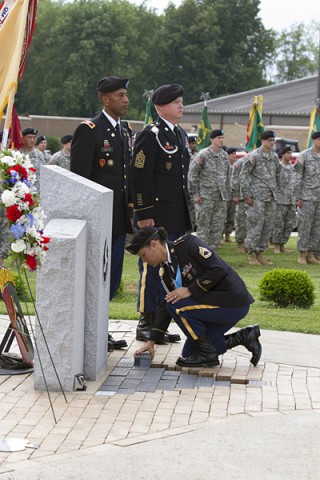 One Soldier explained what the ceremony personally meant to him and how touched he was to be selected for this special observance.

“I think it’s a great honor to memorialize these Soldiers so future generations and future Soldiers can come by and see the sacrifice they paid. It’s an honor and I’m proud to be a part of this ceremony,” said Sgt. 1st Class Danny B. Estep, a native of Doddridge, AR, and a member of the Sergeant Audie Murphy Club with 58th Signal Company, 101st Special Troops Battalion, 101st Sustainment Brigade, 101st Airborne Division (Air Assault).

As the Lifeliners stood with pride, heads bowed down one last time as they remembered their comrades.

Hamilton said, “Those of us standing here in uniform and all of those who wear the uniform around the world who mourn the loss of our brothers and sisters will never forget a single loss of one of our heroes.”

Hamilton closed his comments with a poem written by Henry Wadsworth Longfellow, “Your silent tents of green, we deck with fragrant flowers; yours has the suffering been, the memory shall be ours.”