Nashville, TN – The Tennessee Bureau of Investigation’s most recent Top Ten Most Wanted fugitive, Rodrecus Montrell Smith of Nashville, was captured without incident in Madison, TN. He was added to the most wanted list only two days ago.

In the early morning hours, Smith was located by TBI Special Agents, the US Marshals Task Force and the Metropolitan Nashville Police Department. 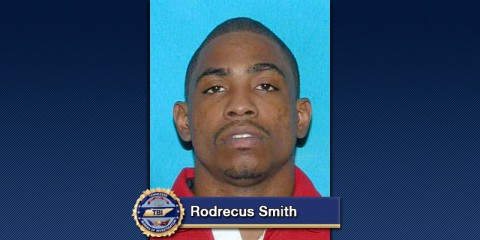 Information was developed from tips which led authorities to 645 Cheyenne Boulevard in Madison where Smith was found hiding in a closet.

He was taken into custody without incident.

Rodrecus Smith, age 25, was wanted by the Metropolitan Nashville Police Department and the Tennessee Bureau of Investigation for a homicide that occurred on October 30th, 2013, where the victim, 35 year old Mario McKnight was fatally shot in area of 12th Avenue South and Argyle Avenue.

Smith has been charged with Murder and Robbery for that incident.

Additionally, Smith is also wanted for felony probation violation, domestic assault, vandalism and failure to appear in court on charges of gun possession by a convicted felon, drug possession and resisting arrest. Smith has a criminal history of violence, drug and traffic related charges.

He will be booked into the Davidson County Jail without bond.