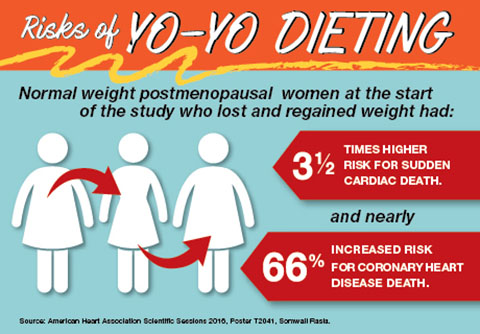 New Orleans, LA – Repeatedly losing and regaining weight, known as weight cycling or yo-yo dieting, may increase the risk of death from heart disease among postmenopausal women who were of normal weight at the start of the study, according to research presented at the American Heart Association’s Scientific Sessions 2016. 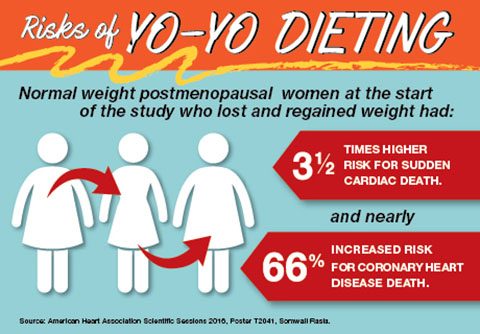 Evidence indicates that being overweight in midlife increases the risk of dying from two types of heart disease. In the first type, coronary heart disease, the blood vessels to the heart become blocked by fat and other substances, decreasing blood flow to the heart.

Losing and regaining weight repeatedly, known as weight cycling or yo-yo dieting, may increase the risk of death from heart disease among postmenopausal women.

The increased risk was for women who were of normal weight at the start of the study but not for overweight or obese women who reported weight cycling.

It is unclear whether losing and regaining weight in adulthood also increases the risk of death from these heart diseases, so the investigators looked at this relationship among postmenopausal women.

The study has several limitations. First, the study was observational, therefore it could only show association and not a cause and effect relationship. In addition, the study relied on self-reports, which could be inaccurate. Since sudden cardiac death occurred relatively infrequently, the cases that did occur could have resulted from chance. Finally, the study included only older women.

“More research is needed before any recommendations can be made for clinical care regarding the risks of weight cycling, since these results apply only to postmenopausal women and not to younger-aged women or men,” Rasla said.

In the United States and worldwide, heart disease is the leading cause of death. Obesity is a major risk factor, along with high blood pressure and cholesterol, diabetes, physical inactivity, poor diet, and smoking.

This study is funded by the National Heart Lung and Blood Institute.