Clarksville, TN – With a year still to go in a career what should be remembered as an Austin Peay State University Athletics Department Hall of Fame career, Lidia Yanes Garcia continues to add accolades to her resume.

This past week, Garcia – a native of Los Realejos, Spain – became the first APSU women’s tennis player to earn a spot in the Intercollegiate Tennis Association Ohio Valley Regional rankings; coming in 15th. 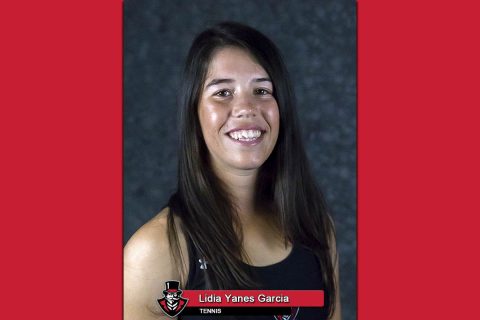 The honor was second this year for Yanes Garcia, as she earned the ITA Arthur Ashe Leadership and Sportsmanship Awards for the Ohio Valley region, which recognizes athletes for their pursuit of excellence on and off the court.

Yanes Garcia went 16-2 overall at the No. 1 singles for the Govs, including an 8-1 mark in Ohio Valley Conference play on her way to becoming the first women’s tennis player in OVC history to win OVC Player of the Year honors three times – breaking a tie with seven other players, including three other former APSU athletes (T.J. Kleynhans (1985-86), Shannon Peters (1990-91), Susan Sheather (1992/94).

She was also the first women’s tennis player to win OVC Player of the Year and Freshman of the Year honors in the same season in 2016.

But it isn’t just on the tennis court only that Yanes Garcia, as she was named to 2018 Google Cloud Academic All-America® Division I At-Large Second-Team, as she carries a perfect 4.0 grade-point in her computer science major.

She was also one of 20 semifinalists for the Arthur Ashe Jr. Sports Scholar Award, given to the most decorated of the more than 1,000 outstanding minority student-athletes nominated by their respective colleges or universities by Diverse: Issues In Higher Education magazine.