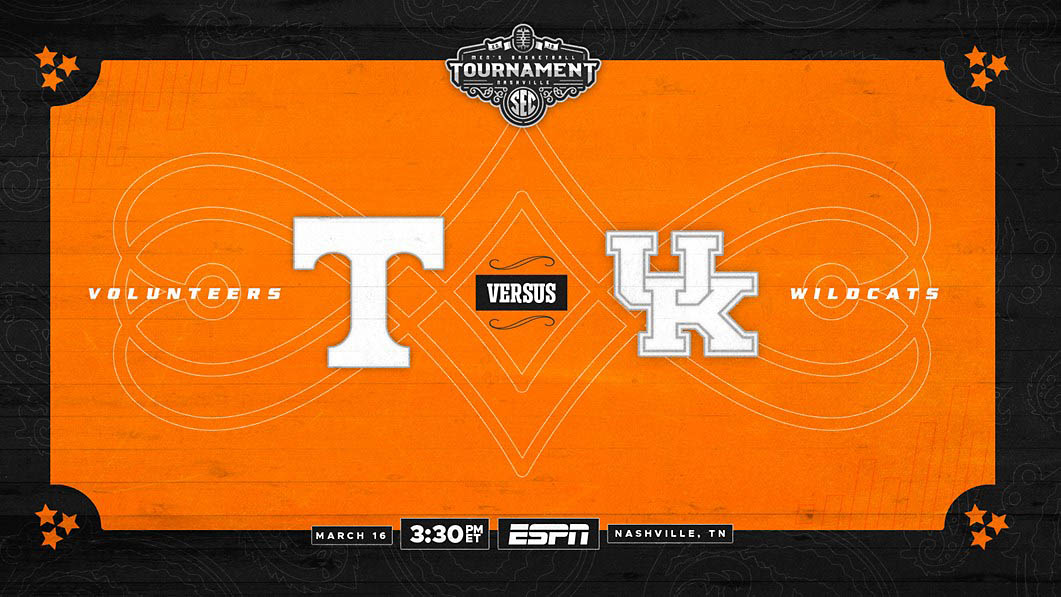 Nashville, TN – The No. 8 Tennessee Vols is set for a rematch of last year’s tournament championship, taking on No. 4 Kentucky in the semifinals of the SEC Tournament on Saturday, March 16th.

The game will tip at approximately 2:30pm CT and will be televised on ESPN and can also be viewed online through WatchESPN. Fans can listen live on their local Vol Network affiliate to hear Bob Kesling and Bert Bertelkamp describing the action. 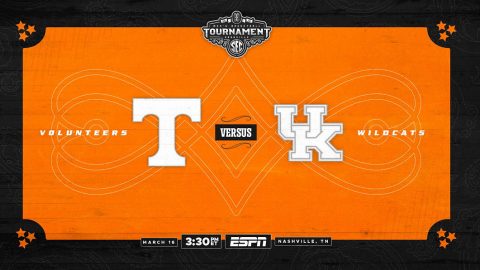 The Tennessee Vols are one of the favorites to win the championship and have the opportunity to earn a top seed in the NCAA Tournament. UT defeated Mississippi State, 83-76, in the quarterfinals to advance to the semifinals for the second year in a row.

Earlier this week, Grant Williams became just the 10th player in conference history to win SEC Player of the Year in back-to-back season and was the first since Arkansas’ Corliss Williamson did so in 1994 and 1995. Williams was also tabbed first-team All-SEC after finishing the regular season as the top scorer in the SEC with 19.3 points per game. He has been one of the nation’s most versatile and reliable players this season, averaging 7.7 rebounds, 3.3 assists, 1.5 blocks and 1.2 steals per game.

Tennessee and Kentucky split the two matchups during the regular season, with both teams winning on their home court. The Wildcats are the No. 2 seed in the tournament and advanced with a 73-55 victory over Alabama in the quarterfinals.

The Wildcats have a 12-4 edge when the teams meet in the SEC Tournament.

Give Tennessee its second SEC Tournament Championship Game appearance in as many years. The Vols have not won the tournament since 1979.

Give Tennessee 29 wins this season, the second-most victories in program history.

Signal the most victories by a Rick Barnes-coached team since his 2007-08 Texas squad finished 31-7.

Make the Vols 4-2 against rival Kentucky over the last two seasons.

This is the second straight year that the Vols have faced Kentucky at the SEC Tournament. Last year in St. Louis, they met in the championship game.

Two of Tennessee’s four losses this season have come in overtime, and all four were away from home against opponents who are currently ranked in the AP Top 25.

Starting point guard Jordan Bone is a Nashville native. In his last four games, he has 25 assists and just four turnovers (6.3 assist/turnover ratio).

John Calipari’s squad has been playing the best basketball of any team in the country as of late, winning 17 of its last 19 games. In non-conference play, UK logged ranked wins over North Carolina, Louisville and Kansas. Kentucky dropped its first matchup of the SEC slate but responded by winning its next nine.

Sophomore forward PJ Washington (14.7 ppg, 7.6 rpg, 1.2 bpg) has inserted himself into the National Player of the Year conversation with his impressive play. As the team’s leading scorer and rebounder, Washington has scored at least 20 points in 10 games and has recorded eight double-doubles.

The Kentucky series is UT’s oldest and most-played among SEC opponents. The Vols and Wildcats first met on February 5th, 1910, and have clashed 227 times over the years.

On 12 different occasions—first in 1950 and most recently on March 2nd—Tennessee has defeated a Kentucky team ranked in the AP top five.

No program in college basketball has logged more wins over Kentucky than Tennessee (72).

Kentucky is one of only two SEC?schools (along with Alabama) to lead its all-time series against the Volunteers.

Tennessee has 15 all-time wins over the Wildcats at Thompson-Boling Arena, including four straight.

Tennessee Vols Have 10 Wins Against Calipari 2.0

Since UK coach John Calipari returned to the college game in 2000-01, Tennessee has dealt him 10 losses. No team has more wins over Calipari-coached teams during that span.

It was the largest loss for the Wildcats in conference play since February 4th, 2017, when they lost by 22 points to Florida.

Backed by a career-high performance from Bob Cousy Award candidate Jordan Bone, the Vols maintained a perfect home record against the Wildcats in the Rick Barnes era while extending their home winning streak to 25 games.

Bone scored a career-high 27 points on 11-of-15 shooting while knocking down all five of his attempts from behind the arc. He eclipsed his previous high on the final Tennessee shot of the game, hitting a 3-pointer falling away into the student section with 12 seconds left on the clock.

National Player of the Year candidate Grant Williams added 24 points to go along with a game-high seven rebounds. Combined, Williams and Bone tallied 51 points, shooting 18-of-28 (64.3 percent) from the field.

Tennessee held the Wildcats to a season-low 52 points and 31.8 percent shooting from the field while limiting them to just 10 points in the paint, outscoring Kentucky by 18 points on the block.

Within the first four minutes of the second half, Tennessee stretched its 13-point halftime lead to 20 points, getting to the rim on four of its first five field goals. The 10-4 run was capped by a fastbreak up-and-under finish from Lamonté Turner to push it to a 47-27 edge with 16:17 left in the game.

Turner finished with a team-high six assists, with five coming in the final 20 minutes of the game.

Junior point guard Jordan Bone scored a career-high 27 points on 11-of-15 shooting while leading Tennessee to an upset of fourth-ranked Kentucky on March 2nd, 2019, at Thompson-Boling Arena. Bone knocked down all five of his attempts from behind the 3-point arc. He eclipsed his previous high on the final Tennessee shot of the game, hitting a 3-pointer falling away into the student section with 12 seconds left on the clock. Tennessee held the Wildcats to a season-low 52 points and 31.8 percent shooting from the field in the 71-52 triumph.

John Calipari is the league’s active leader in career wins, with 705. Rick Barnes is a close second with 689 victories to his credit.

Among all active Division I head coaches, Calipari and Barnes rank sixth and seventh, respectively, in total head coaching wins.