Hailing from Hillscheid, Germany, Schmidt has established herself as one of the top tennis players in the OVC and one of the best in Austin Peay State University history. 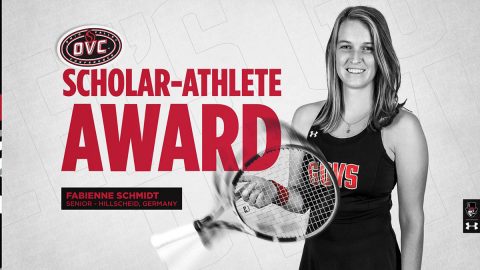 A vital member of the Governors undefeated OVC regular season and tournament championship team in 2018-19, Schmidt has posted an overall record of 57-12 in her Austin Peay State University career, including a 15-2 mark in OVC play.

Schmidt led the Governors on the court last season, going 16-3 in singles play and 18-4 in doubles action. In the fall, Schmidt won the Flight One Singles and Flight One Doubles titles at the APSU Fall Invitational, before partnering with Danielle Morris to knock off the region’s No. 5 overall seeded doubles pairing at the ITA Ohio Valley Regional.

The spring season saw Schmidt post a 9-2 mark while playing exclusively from the No. 1 singles position, where she earned OVC Player of the Week honors before the season was interrupted by the COVID-19 Coronavirus pandemic.

Her accomplishments on the court are accompanied by a brilliant academic background. A three-time Intercollegiate Tennis Association Scholar-Athlete, Schmidt has appeared on the Dean’s List each semester that she’s attended Austin Peay State University.

A three-time recipient of the OVC Academic Medal of Honor, Schmidt was also named to the OVC Commissioner’s Honor three times and was named to 2020 Arthur Ashe, Jr. Sports Scholar Teams, which were selected by Diverse: Issues in Higher Education magazine. At the conclusion of her junior year in school, Schmidt had a perfect 4.0 grade point average in marketing with a minor in management.

In May, the Governors women’s tennis program earned an Honorable Mention in ITA Community Service Award, which Schmidt helped her team achieve through her volunteer work at Burt Elementary, Read Across America events, Buddy Ball, the Breast Cancer Awareness Run, Rise Up Academy and working at various tennis clinics.

Schmidt is the 26th Austin Peay State University student-athlete, and second-straight from the women’s tennis team, to receive the OVC Scholar-Athlete Award since it was first awarded during the 1981-82 academic year. Schmidt and her former teammate Lidia Yanes Garcia, who won the award in 2018-19, are the only members of the women’s tennis program to be named OVC Scholar-Athletes, joining four members of the men’s tennis program who have earned the honor.


The OVC Scholar-Athlete Award is the highest individual honor that can be earned by OVC student-athletes and is given annually to three men and three women for their accomplishments in both the classroom and athletic arena and because of their leadership abilities.

The six winners were selected from a group of 18 finalists by a vote of OVC Faculty Athletics Representatives. Honorees must have performed athletically with distinction, earned at least a 3.5 grade-point average and conducted themselves in a manner which has brought credit to the student-athlete, his or her institution, intercollegiate athletics and the OVC. The award is based on academic and athletic criteria/accomplishments achieved during the 2019-20 school year.