HomeNewsTennessee Unemployment improves in Almost Every County in July
News

Tennessee Unemployment improves in Almost Every County in July 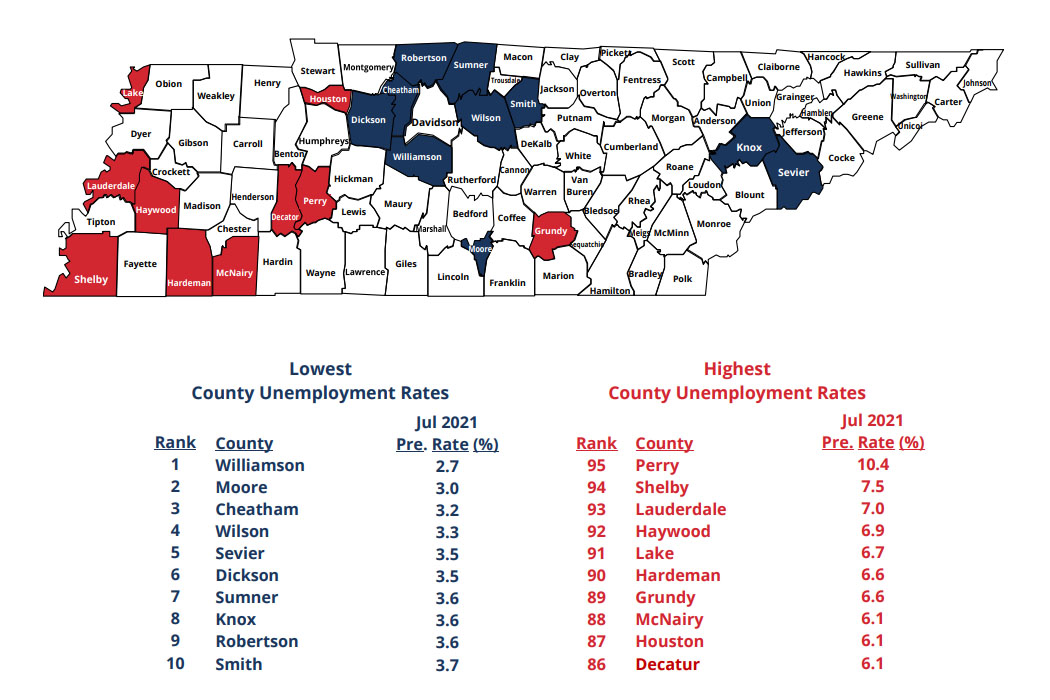 Nashville, TN – As Tennesseans continue to rejoin the workforce, all but one of the state’s 95 counties experienced lower unemployment in July, according to new data from the Tennessee Department of Labor and Workforce Development.

Montgomery County’s unemployment rate for July was 5.0 percent which is down 0.9 percent from June. 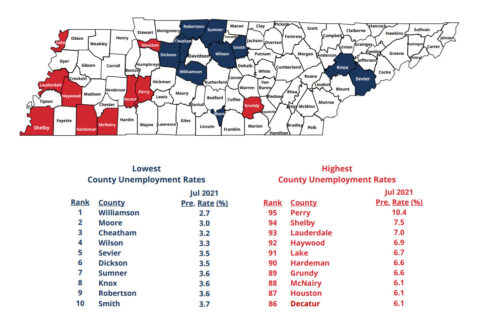 Sixty-two counties had unemployment rates lower than 5%, while rates were 5% or higher, but less than 10%, in 32 counties. Unemployment was above 10% in one county.

Perry County was the only county with a jobless number of over 10%. Its July rate of 10.4% represented a 2.6 percentage point drop from its June rate of 13%. Shelby County had the state’s second-highest rate for the month at 7.5%, which was 0.6 percentage point lower than the June rate.

Weakley County was the only county to experience an increase in unemployment. Its rate inched upward during the month from 5.2% to 5.5%.

County unemployment rates are not seasonally adjusted to factor in seasonal economic influences.

The statewide unemployment situation improved for the second consecutive month. Tennessee’s seasonally adjusted July rate of 4.7% was 0.2 of a percentage point lower than June’s revised rate of 4.9%.

The unemployment situation also improved nationally in July, but still came in higher than Tennessee’s rate. The seasonally adjusted rate for the United States dropped 0.5 of a percentage point to 5.4%.

A complete analysis of the July 2021 county unemployment data, including data for each of the state’s metropolitan and micropolitan areas, can be found here.

The state of Tennessee is working to make job seekers TN Work Ready. Individuals can find the resources needed to search for jobs, earn a high school equivalency diploma, and remove barriers to work at www.TNWorkready.com.