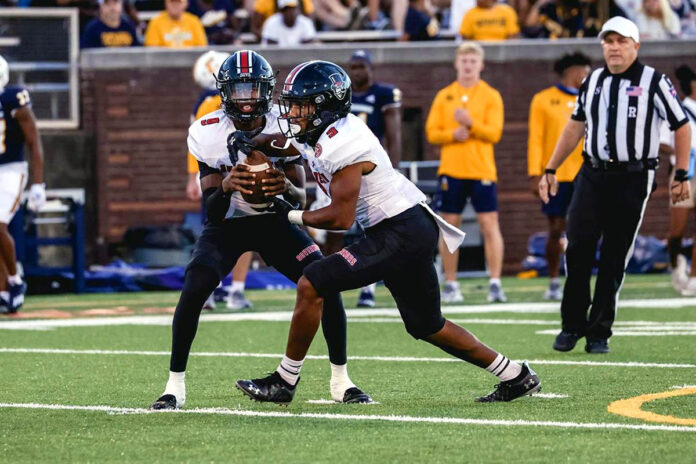 The win is Austin Peay State University’s first in seven tries against Chattanooga, and its third-straight win against a ranked FCS opponent—all since March 28th. The Govs have now won seven out of their last 10 meetings with a ranked FCS team since the start of 2019.

The Mocs got on the board first. After three fruitless possessions to start the game, Chattanooga took over near midfield after an interception and marched quickly into the red zone on a quick strike from Drayton Arnold to Reginald Henderson for 21 yards and an 18-yard scamper by Tyrell Price into the red zone. The march to the end zone ended when Price plunged in from three yards out to put the hosts ahead first.

Another swapping of punts occurred, and this time the APSU Govs found the equalizer. First, Draylen Ellis hit Baniko Harley for 18 yards to get the Govs into Chattanooga territory again, then he dropped back and lofted one into a single-covered Harley in the end zone. For the 15th time in his career, Harley came down with it for a score and his 35-yard house call put the Govs on the board for the first time in the Fall 2021 campaign.

The APSU Govs got a game-changing pick of their own early in the second quarter when Johnathon Edwards hauled in an acrobatic snag near the Chattanooga sideline. Although he was initially ruled out of bounds, further review awarded him his third career interception and put the Govs on the Chattanooga 39-yard line.

It didn’t take long for Austin Peay State University to capitalize. After Jariel Wilson picked up nine yards on a first-down scamper, Ellis hooked up with Kansas State transfer DJ Render and he took his first catch as a Gov to the end zone to put the Govs in front.

The Mocs had an answer. Arnold found Tyler Walker for 20 yards to move the Mocs near midfield, then chunk runs—14 yards for Price, 13 for Ailym Ford—plus an untimely face mask put the Mocs near the goal line. This time Ford did the honors from three yards out to make it 14-13 with a 9:30 to go in the half.

The APSU Govs pulled back ahead before halftime with a quick six-play drive. Harley made an acrobatic, juggling grab along the sideline to drag the Governors deep into Moc territory, netting 47 yards—four plays later, freshman Maddux Trujillo nailed his first field goal attempt as a Gov from 33 yards out to give Austin Peay State University a 16-14 lead heading into halftime.


The Mocs opened the second-half scoring on a flag-fueled drive featuring a roughing the passer, a pass interference, and an unsportsmanlike penalty—all on the APSU Govs. The Mocs only gained 16 yards on offense for the drive, but the last 12 came from Arnold to Henderson to put the hosts back in front.

A Govs offense that had found itself stuck in third gear for much of the third quarter came to life in the last minutes of the period, and it was largely thanks to freshman Drae McCray. The Tallahassee, Florida native broke the big play to get the Govs in Chattanooga territory with a 57-yard catch-and-run down to the Mocs’ eight-yard line.

On the next play, Ellis rolled right and found McCray streaking across the back of the end zone and rifled his third scoring toss of the day into the freshman’s sure hands, giving the Govs a 23-20 lead heading into the fourth quarter.

This was the moment the defense locked it down. For the entire fourth quarter, Chattanooga gained 31 yards of total offense, with 28 coming on one pass from Arnold to Tyron Arnett. The Mocs weren’t able to gain any traction in the trenches late in the game, with the Govs holding their hosts to negative-seven yards on six fourth-quarter carries.

When it came time to begin putting the game away, the APSU Govs turned to the reliable workhorse to move the chains and keep the clock running. Ahmaad Tanner opened the drive with a 14-yard scamper. Then another run for eight. Then one yard. Then he burst through the line and rumbled for 31 yards into Chattanooga territory.

The Dalton, Georgia native was by no means done. In fact, he took the last four yards of the drive on a swing pass from Ellis into the end zone for a score, then 30 yards on Austin Peay State University’s final drive to help put the game away. All told, Tanner broke the century mark for the second consecutive game, finishing with 103 on 19 carries—with 82 yards coming in the fourth quarter alone.


Ellis was his usual electric self, tossing for 325 yards on 23-of-33 passing with four scores; many of his targets found Harley, who tallied 137 yards on six catches. McCray had a fine debut in his own right, with five catches for 87 yards and a score.

Edwards would later haul in a second interception on the night to put the contest away for the Govs. Kordell Jackson did his usual thing defensively, leading the way with eight tackles, a pass break-up, and 2.5 tackles for loss.


Next Up For APSU Football

The Austin Peay State University football team will enter next weekend unbeaten, nationally ranked, and matched up against an SEC titan in Ole Miss. The APSU Govs will battle the Rebels on Saturday, September 11th in a 6:30pm CT contest from Vaught-Hemingway Stadium in Oxford, Mississippi.