Washington, D.C. – The cost of a barrel of oil is nearing $120, nearly double from last August, as increased oil demand outpaces the tight global supply.

Meanwhile, domestic gasoline demand rose last week in the wake of a robust Memorial Day weekend of travel. As a result, the national average for a gallon of gas surged 25 cents in one week to hit $4.86.

“People are still fueling up, despite these high prices,” said Andrew Gross, AAA spokesperson. “At some point, drivers may change their daily driving habits or lifestyle due to these high prices, but we are not there yet.” 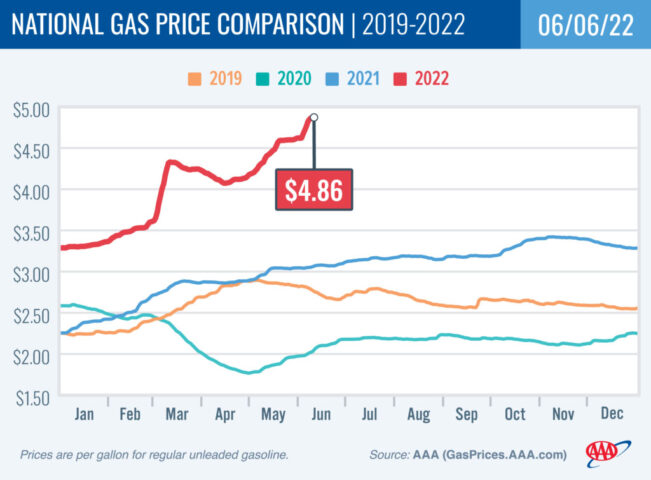 At the close of Friday’s formal trading session, WTI increased by $2 to settle at $118.87. Crude prices rose last week after OPEC+ announced it would increase monthly production to 648,000 b/d in July and August instead of 400,000 b/d as previously planned.

However, the market is still concerned that supply could remain tight as the European Union works to implement a 90 percent ban on Russian oil imports by the end of this year. Additionally, prices were boosted after EIA reported that total domestic stocks decreased by 5.1 million bbl to 414.7 million bbl.

The current storage level is approximately 13.5 percent lower than a year ago, contributing to rising crude prices. For this week, crude prices could rise again if EIA’s next report shows another decrease in total domestic stocks.