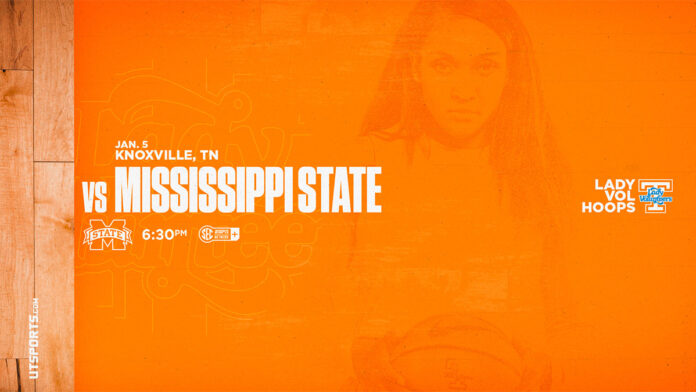 In an interesting scheduling coincidence, the Vol and Bulldog men’s basketball programs also met this week in Knoxville, with UT cruising, 87-53, on Tuesday night.

The UT Lady Vols are tied atop the SEC standings along with South Carolina, LSU, Ole Miss and Missouri, while MSU currently is tied for sixth with three other teams. Kellie Harper‘s squad enters on a three-game winning streak and has been victorious in eight of its past 10 contests, with its only two losses coming vs. (then) No. 9/9 Virginia Tech (59-56) on Dec. 4 and at No. 2/2 Stanford on December 18th (77-70).


UT is coming off an 89-76 triumph over RV/NR Alabama (12-3, 1-1 SEC) on Sunday, providing the Big Orange women’s program its 500th victory at Thompson-Boling Arena against only 54 losses in the 36-year history of the venue.

The Bulldogs will take to The Summitt after falling at home on Sunday in front of 6,023 at Humphrey Coliseum to bitter rival Ole Miss, 61-50, with MSU tallying its lowest scoring output of the year. State had won seven straight contests overall and was 8-0 at home until that setback against the Rebels.

Thursday night’s tilt will mark the final contest in a portion of the schedule in which Tennessee has played nine of 11 at home with no back-to-back road games. UT is 8-2 during that stretch, going 7-1 at home and 1-1 on the road.

Play4Kay Pink Game: Purchase a pink shirt from Orange Mountain Design and receive a free ticket to the Play4Kay game vs Vanderbilt 2/12. Proceeds from the shirts will be donated to the Play4Kay Foundation.

Thursday night’s game will be streamed on SECN+, with Andy Brock (PxP), LVFL Kamera Harris (Analyst), and Sarah Detwiler (Reporter) on the broadcast.

The Lady Vol Network broadcast also can be heard frequently on satellite radio via SiriusXM and the SXM App. UT vs. MSU, however, will not be available.

Tennessee Lady Vol senior Rickea Jackson transferred to Tennessee during the offseason after playing the first three seasons of her career at Mississippi State.

Jackson played for three different head coaches during her time in Starkville, including Vic Schaefer, Nikki McCray-Penson and Doug Novak.

In a visit to Knoxville with MSU on February 24th, 2022, Hayes and the Bulldogs dropped an 86-64 decision to Tennessee.


UT faced Anastasia Hayes and her sister Aislynn Hayes, also at Mississippi State now, when they were both at Middle Tennessee State. The Lady Vols handled the Blue Raiders in the NCAA First Round in Austin, Texas, on March 21st, 2021, 87-62.

Familiar Faces From Other Places

Smith played against Tennessee last season in the NCAA Sweet 16 in Wichita, Kansas, seeing only four minutes of duty and going 0-1 from the field.

Bulldog Ramani Parker also followed Purcell from Louisville after spending three seasons with the Cardinals. Parker did not appear in the game vs. UT last season.

In two SEC games, the Lady Vols are putting up a league-leading 83.0 points per contest.

The Lady Vols have increased their season free throw percentage to 70.6 by shooting 75.2 over their last seven games. Their 74.4 percent clip in two SEC games ranks them No. 3 in the league, which is key since they are No. 35 in the NCAA in FT Atts. Per Gm. (18.4).

The Lady Vols have two standouts scoring in double figures and seven other active players averaging at least 4.6 ppg. and double-digit minutes per contest.

In a role that she has embraced and in which she is excelling, Rickea Jackson is coming off the bench and leading Tennessee in scoring (17.4 ppg.) and standing second in rebounding (5.8 rpg.). She is No. 3 in the SEC in scoring in all games.


Jackson ranks No. 1 in the SEC in league games in scoring average (25.0) and field goal percentage (74.1), and she has recorded a team-leading five 20+ scoring efforts. She also has tallied double figures in points in 12 of her 14 games.

Jasmine Franklin, Jillian Hollingshead and Karoline Striplin have emerged as inside presences as Tennessee attempts to offset the loss of center Tamari Key. Franklin is putting up 6.8 ppg. and 6.2 rpg. over her last seven contests, while Hollingshead is contributing 6.6 ppg. and 4.4 rpg., and Striplin is producing 5.6 ppg. and 4.1 rpg.

Puckett (9-17, 52.9 pct.) and Tess Darby (14-28, 50.0 pct.) have been sharpshooters from beyond the three-point arc over the past seven contests and freshman Justine Pissott has emerged as well, connecting on four of her last 10 threes for 40 percent while flashing a total shooting percentage of 44.0 by scoring in the mid-range and transition facets of the game.

UT recorded a school-record 84.6 shooting percentage for a quarter in the third frame vs. Wright State.

After holding opponents to 60 points or fewer only once in the first six games of 2022-23, the Lady Vols have done so five times in their past 10 contests, including four of the past eight outings.

Over the past seven games, Tennessee is holding opponents to 37.1 percent shooting from the field and 61.9 points per contest after allowing 38.2 percent and 68.8 percent over the first nine contests.


Tennessee limited Florida to 25 percent shooting beyond the arc and only three 3-pointers on December 29th, marking only the fourth time this season UT has held a foe to three or fewer treys. The Lady Vols had been giving up 7.1 per game for the season and allowing a percentage of 31.0.

UT followed that by allowing an Alabama squad that averaged 10.1 threes per game to hit only six on 28.6 percent accuracy.

Tennessee is averaging 44.9 rebounds per game over the past seven contests and has elevated its season average to a high of 43.4 entering the Mississippi State game and ranks No. 25 nationally and No. 4 in the SEC.

UT’s 55 rebounds vs. Wofford marked the third time it had been +50 this season.

Despite facing a more rigorous schedule, UT is averaging more steals (7.6 to 7.2) than it was last season.

Looking Back At The Alabama Game

Tennessee never trailed in cruising to an 89-76 victory over Alabama in front of a crowd of 8,214 in Thompson-Boling Arena on Sunday to record the women’s basketball program’s 500th win in the 36th year of the venue.

The Lady Vols (10-6, 2-0 SEC) shot 54 percent on the day with four players landing in double figures and three setting new season highs. Senior Rickea Jackson was the top scorer for UT with 22 on the day, while junior Tess Darby, sophomore Jillian Hollingshead and graduate Jordan Walker all posted season bests with 16, 15 and 15, respectively. Senior Jordan Horston narrowly missed a double-double with nine points and a career-high-tying nine assists.

Tennessee ranked No. 18 in the NCAA’s NET rankings, won its third straight game and posted its eighth triumph in its last 10 contests by defeating the No. 15 team in the NET. Alabama, meanwhile, saw its 10-game victory string come to an end on The Summitt.

Tennessee improved to 36-5 all-time in its first SEC home game of a season and has won six of its last seven such contests.


Kellie Harper improved to 4-0 in SEC home openers, defeating Missouri, Arkansas, Alabama and Alabama again in her four seasons as head coach of the Lady Vols.

A Look At The Bulldogs

The Bulldogs are forcing 20.5 turnovers per contest.

Mississippi State fell to 1-1 in the SEC Sunday night after dropping a heartbreaker to Ole Miss, 61-50.

The Bulldogs started the night on a 7-0 run and won the first frame, 15-11. Following the opening quarter, Ole Miss outscored the Bulldogs 50-35.

Jessika Carter had her 13th double-digit scoring game with 15 points and seven rebounds to lead MSU.

UT and MSU have met six times in the SEC Tournament, with the Lady Vols owning a 4-2 record.


Key tallied her 10th double-double of the season, adding 15 boards to her point total. She also blocked six Bulldog shots, passing the century mark for swats this season as she entered the day with 99 and finished with 105.

The Tennessee Lady Vols basketball team travel to Nashville this weekend to take on Vanderbilt on Sunday in Memorial Gymnasium. The tip-off is at 12:02pm CT/1:002pm ET.

The contest will be broadcast on the SEC Network.