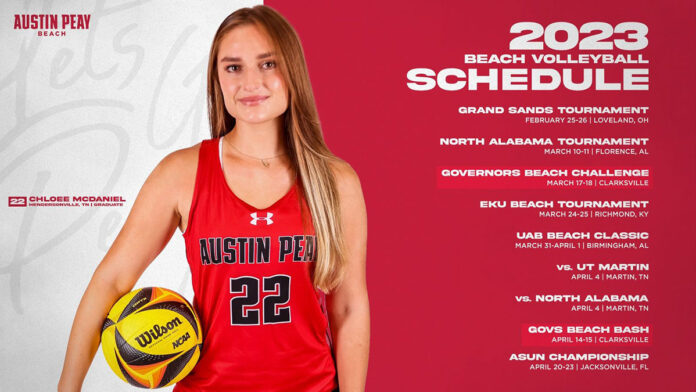 The APSU Govs kick off their seventh season of beach volleyball at the Morehead State’s Grand Sands Tournament, February 25th-26th, in Loveland, Ohio, where they will take on the Eagles, Liberty – whose beach volleyball team competes as a club sport – and ASUN Conference rival Eastern Kentucky.


Austin Peay State University then travels to North Alabama’s tournament, March 10th-11th, where they are set to square off with the host Lions and Chattanooga. The first of two home tournaments is up next when the Governors host Central Arkansas, UT Martin, and Lindenwood at the Governors Beach Challenge, March 17th-18th.

The EKU Beach Tournament, March 24th-25th, is up next with the Govs traveling to Richmond, Kentucky, to take on the host Colonels, Liberty, Tusculum, and Ottawa. Then Austin Peay State University heads south for the UAB Beach Classic, March 31st-April 1st, where they will play host Alabama-Birmingham, Mercer, Louisiana-Monroe, and ASUN foe Jacksonville.

The Governors then travel to in-state rival UT Martin, on April 4th, for a midweek doubleheader against the Skyhawks and North Alabama at Skyhawk Beach Volleyball Complex.

Austin Peay State University wraps up the regular season when it hosts the Govs Beach Bash, April 14th-15th, with Chattanooga and Jacksonville State currently set to attend the event.


Exact match dates, times, and opponents will be finalized in the coming weeks. Check the 2022-23 APSU beach volleyball schedule on LetsGoPeay.com or follow the beach volleyball team (@GovsBVB) on Twitter and Instagram for the news and updates on the schedule.