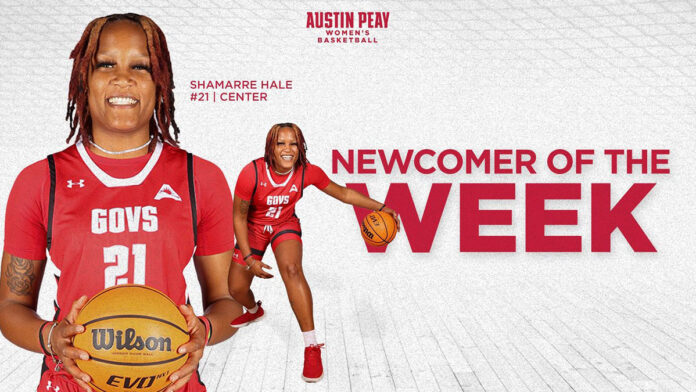 Hale kicked off the week with an 18-point, 11-rebound performance in a 64-53 win at Central Arkansas, Thursday – her second double-double in a three-game span. Hale went 7-for-7 from the field in the win against the Sugar Bears, becoming the first Governor to not miss a shot on at least five attempts since APSU alumna D’Shara Booker went 5-for-5 from the field in the Women’s Basketball Invitational, March 20th.


The Chicago native scored 11 points and grabbed seven rebounds in the second half against the Lions, going 4-for-4 from the field and 3-for-3 from the charity stripe while also converting a pair of three-point plays to lead APSU to its 10th win of the season.

Hale followed her perfect night against Central Arkansas with a career outing in Saturday’s 61-52 win at North Alabama. The 6-1 center scored a career-high 22 points and grabbed nine boards against the Lions.

Hale matched her season-high with nine made field goals and a trio of offensive rebounds.

In addition to her work on the glass, Hale recorded her 12th block of the season against the Lions which is 11th in the ASUN this season. She also tallied her 14th and 15th steals, her fifth-consecutive game with a steal this season.

Hale is third in the ASUN with a 68.5 field-goal percentage and has made at least 50 percent of her shots from the floor in 11-straight games.

Hale is the first Governor to receive a conference weekly honor in back-to-back weekly honor since Yamia Johnson was named the Ohio Valley Conference Player of the Week on December 21st and 28th last season.


Austin Peay, which sits in a three-way tie atop the ASUN standings, returns home for a pair of games against Liberty and Queens. The Governors host the Flames for “We Back Pat Night” in a Thursday 6:00pm contest before facing the Royals on Saturday, in the Winfield Dunn Center that begins at 3:00pm.

For news and updates throughout the Governors’ inaugural season as a member of the ASUN Conference, follow the APSU women’s basketball team on Twitter and Instagram (@GovsWBB) or check back at LetsGoPeay.com