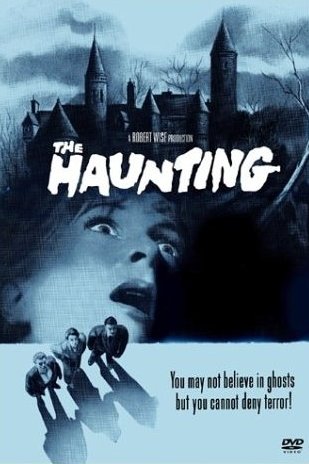 Though known for spectacular epics such as Ryan’s Daughter, Robert Wise also lent a deft hand to the creation of tales of the supernatural, including the classic film, The Haunting, circa 1963, based on a novel by Shirley Jackson.

In the style of Alfred Hitchcock, Wise opted to let the mind, the imagination, be the biggest instrument of fear. The haunting has a prologue the outlines the shadowed history of the house, a haunted mansion  in old New England (the film was actually shot in a British manor), where four guests are about to gather with the intention of debunking, demystfying a haunted home. Julie Harris leads the cast a Eleanor Vance, a believer in the supernatural and unsettled by the recent death of her mother. Richard Johnson is Dr. Markway, the requisite anthropologist, the science behind the sensory. The beautiful and elegant Claire Bloom plays an eccentric, free-living lesbian (a role a  ahead of time in the conservative sixties) with extra-sensory abilities, and the equally requisite playboy, Luke Sanderson (played by Russ Tamblyn, dimples intact). Sanderson is the prospective owner of Hill House via inheritance.

From the get-go, The Haunting is a spook fest of odd noises, doors that breathe, writing on walls, and spiral cases with a mind and movement all its own.  Sound is a key player in the madness. Wise was smart enough to wield the effects with subtlety and let the degradation and disintegration within the guests psyche scare the daylights out of the viewers. As with all good horror stories, what we imagine is far more terrifying than anything a director can put on screen.

Lady in White (1988) is a low-budget work of art and love from directorFrank LaLoggia, that mixes small town charm with absolute terror. It’s a Halloween tale rooted in LaLoggia’s upstate New York homeland. Young Frankie (Lukas Haas) is locked in a cloakroom on Halloween circa 1962., where he sees the ghost of a little girl and is nearly strangled by an unseen someone. Convinced that ghostly antics are at play,  Frankie is convinced that the ghost is somehow connected to the Lady in White of local legend. Though a man is tried and convicted in Frankie’s attempted murder, there’s a lot more to the story … and LaLoggia lays it out before us in a mix of mystery and a young boy’s sense of grief and loss with the death of his mother.

In the Sixth Sense, action actor Bruce Willis takes the low key road in this subtle horror of a young boy who sees the “other side,”  a ghostly tale replete with subtleties and overflowing with mood. Again, what is untold, what is unseen, is more frightening that anything laid before us as Willis, playing a psychiatrist adept at rooting out childhood trauma, tries to uncover the mysteries surrounding a child living in terror. This 1999 movie is among the best “haunting” stories in decades.

Stephen Spielberg took horror to new heights with the “crossing over” film Poltergeist in 1982. He mixed the greed of developers with the ghosts who should be resting peacefully in hallowed ground with one all-American family pays the price in fear and abject terror. The arrival of academic ghost-busters documents the escalating haunting and the search for a missing child. What starts as seemingly magical pranks quickly become a matter of life and death, a test of faith, and a challenge to one family’s courage and love. Like most Speilberg films, the “normalcy” of community and the ordinary-ness of the lives about the turned up side down is all part of the set-up. What could possibly be so wrong in this community? The answer unfolds to a stunning conclusion.

Devastated by the tragic and unexpected death of his wife and daughter in a car crash, composer John Russell (George C Scoot) rents a century old home away from it all. So begins The Changeling, This  1980 haunted house tale is overflowing with decades of lies and dozens of  secrets to be revealed. John, initially intent on writing and composing in solitude, soon realizes he is not alone in this rambling mansion.

Drive-In Saturday Night runs weekly on Fridays through Dabor Day. It’s a look at old and few new classics, the kind of popcorn movies that dominated drive-in theaters and Saturday matinees a generation ago.