The Chimes: The Roxy’s gift to Clarksville 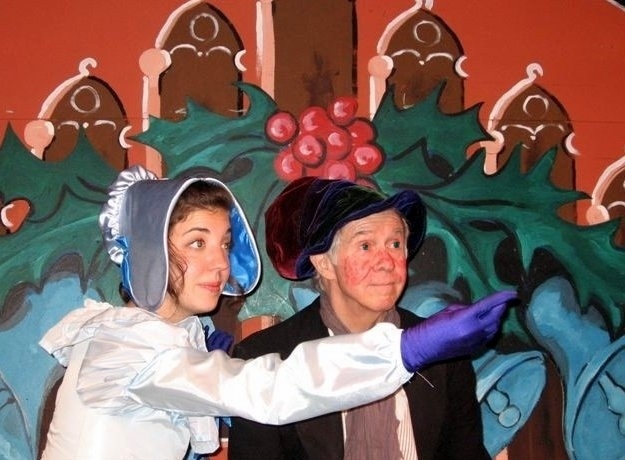 Chimes, often referred to as Charles Dicken’s “other Christmas Carol,” is an elaborate and intricately staged holiday production told through a mix of narrative and dialogue. The play runs through December 22 at the Roxy Regional Theatre in downtown Clarksville.

This adaptation, written and directed by the Roxy’s own John McDonald, also features McDonald in a supporting role as Browley, Lord and ostentacious husband to Lady Browley (Nikki Ferry who has a dual role in this show), both representing a piece of the aristocracy. They are only equaled in this theatrical rendition of the upper crust by the Alderman (Luke Eddy), whose disdainful arrogance for the poor and “unworthy” make one want to jump up from the audience.

A lengthy one-act production, the show opens with Veck and the character known simply as The Narrator (Anne Elyse Chambers with an exhaustive amount of dialogue/narration) setting the stage for a family story/love story in which Veck’s daughter Meg (Liz Lord) and her fiancee Richard (Joe Sonenshein) announce their intent to marry on Christmas Day. Veck is enthralled and happy, until a dastardly Alderman (the Scrooge of Chimes) tries to destroy the young couple’s chance at happiness.

A second storyline involves a young man, Will Fern (Nathan Whitmer) who’s taken on the responsibility for a infant, an orphaned niece. Fern arrives in the village, searching for an elusive relative, stumbling instead upon Veck, who has so little but also has no hesitation at sharing what he has with a stranger.

Throughout the story we hear the chimes, ringing softly, loudly, lulling us into complacency before mystical lights and ringing bells open a doorway to one possible future. From the happiness of family gathering, we are plunged into loss and the aftermath of loss. Love shatters, children are separated from family, the innocent are jailed, and life fades from brilliance to sadness and despair. It’s one possible life, one possible future much like the stories the ghosts of a Christmas Carol spin for old Ebenezer.

Is it real? The answers lie on the stage as the tale moves to its conclusion.

This is Jay Doolittle’s show; his performance is the linchpin upon which all else flows. He is brilliant, displaying an animation and when necessary, a pathos worthy of performance of the year. In short, he is a joy to watch. From that strength, and with McDonald’s intricate manipulation of the players around the mobile sets, the remaining cast emerge with similar strength in their supporting roles. The Alderman has all the swagger, and a swirling cape to go with it, of an aristocrat bent on being a shade better than everyone around him. Meg and Richard have all the sweetness and gentility that make us root for their happiness.

Lord and Lady Browley exude the self-centered greed and disdain that make them prime villains, both played with a sense of the comedic and an exaggerated style and verve. We love not liking them. Will Fern pulls our heartstrings with his love for a child the audience sees only as a blanket wrapped baby held tight to his shoulder, or nestled in a basket near a warm woodstove. The supporting role of Mrs. Chickenstalker ( also Nikki Ferry), Fern’s relative and a local shopkeeper, is the smallest role, but no less significant, no less well performed. 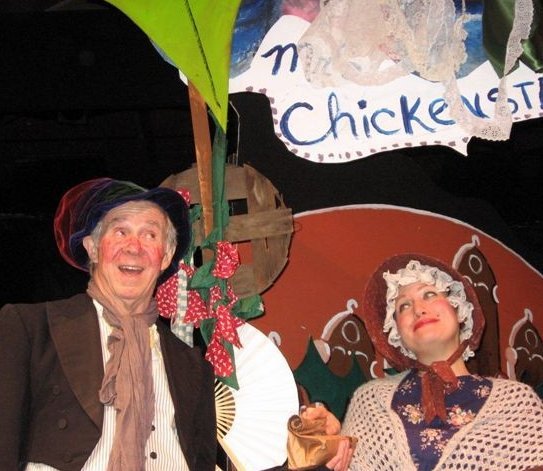 What is fascinating about this play, other than the enormous amount of non-stop dialogue and narration, is the movement of the players, who navigate three multipurpose sets that turn from winding streets and alleyways to a church doors, a festive living room, the belfry where the Chimes ring out, all with a deft twist and turn by an ever moving cast.

No one misses a beat in word or motion. In the absence of an intermission, there is no breathing room for the cast, and they rise to the challenge and the intensity this staging demands.

The costuming in this production is remarkable: from the ragged garments of the impoverished to the ball gowns of the aristocracy ablaze in holiday color, from worn shawls to striped stockings and the velvet hat worn by Veck, the garments are striking, each perfect for its wearer, and worn for maximum effect. Veck’s hat, lush and at odds with his otherwise impoverished vestments, is a reminder that he holds a richness unique to himself. 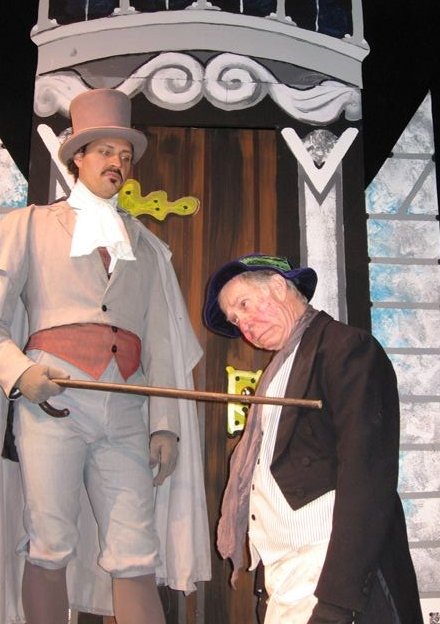 There is a precision to this production that makes it worthy of study, and that is what some 6000 Clarksville area students will be doing as they view this play between now and Christmas. It’s a staggering schedule for the players, who will be doing as many as three stagings to accommodate a host of young viewers in addition to the regular performances. Kudos to the Roxy and the cast and crew for this Herculean effort.

Musician Brandon Wilson kept the flow of haunting background music moving from scene to scene, with the overlay of chimes.

Chimes, though lesser known among Dickens’ works, has no less a message that the more frequently viewed A Christmas Carol. Beyond the message lies the presentation of it, and in this case, the Roxy, in a word (or two), “nailed it.” It is their Christmas gift to Clarksville.