When was the last time you heard applause in a movie theater? Playing to a packed theater, the 2007-08 Live from the Met HD season opener — Romeo and Juliette — came just in time to please a Christmas audience who were not the least bit shy about breaking the otherwise absolute silence for a round of applause… 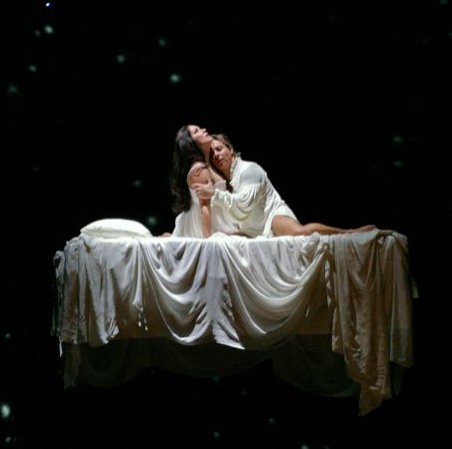 The performance was a live worldwide broadcast of Gounod’s Romeo and Juliette, the operatic rendition of Shakespeare’s classic and tragic love story. It was a stunning performance. Though the stage itself was stark, the backdrop of moonscapes and nebula created a romantic, dreamy setting for the lovers. From a gala birthday ball with grand costumes and elaborate masks the the sweeping declarations of love in the “balcony scene,” to a sensual wedding night on a softly draped bed that seemed to drift among the stars on a moonlight breeze, Romeo and Juliette seemed to offer individual vignettes, paintings for our imagination to savor. 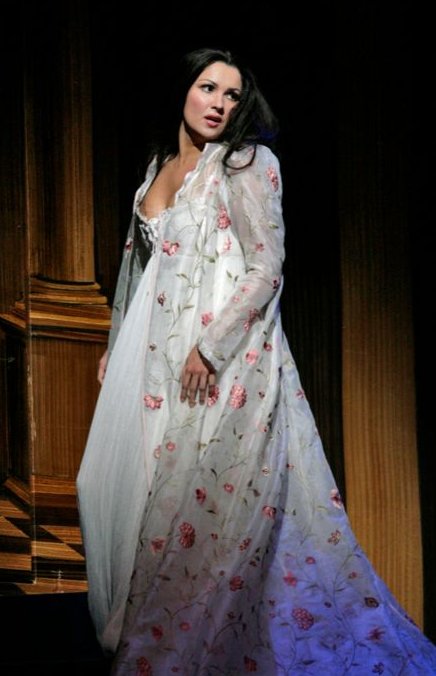 Anna Netrebko (right) created a lush and lovely Juliette, bringing a strength of voice and a haunting beauty to her arias and duets. Robert Alagna had the never-ending, voice-straining task of near constant on stage presence, yet his voice never faltered as he created a richly textured presentation of the love struck Romeo. Given the ages of the the lovers in the story, it is often difficult to find performers seasoned enough to sing the roles while looking young enough to be the characters. Netrebko looked like a youthful Juliette, hair pulled back and twined with jeweled ribbons or tumbling loosely about as she wakes besides Romeo in her marriage bed. Alagna masked any signs of true age with zest, vigor and a sense of humor.

The opera opens with the bodies of Romeo and Juliette surrounded by a chorus that sings of the long-standing family feud and the road to tragedy. With the donning of masks, we step back in time to Juliette’s party and the first encounter between the lovers. 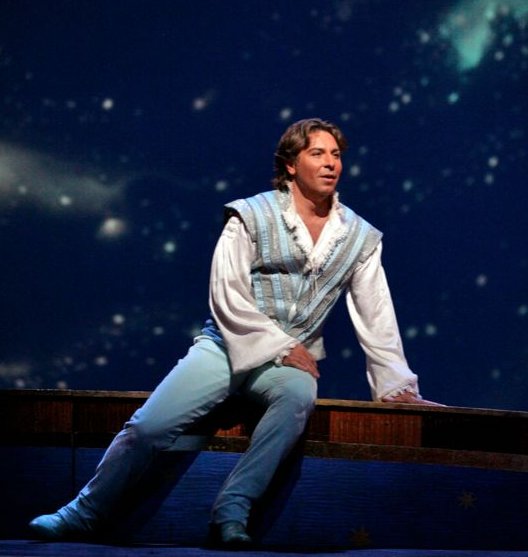 The highlights of the performance were the marriage sequence and the nightingale-lark exchange with the break of dawn. The illusion of the softly draped bed drifting among stars is stunning, as is the exuberance of the lovers. That moment of joy is only equaled by the sobering power of the death scene, in which Juliet awakens from her false death to find Romeo dying, and in delivers a killing wound to herself. The move to a last kiss, a haunting last touch before death bring the performance to a dramatic conclusion.

The detail visible through the innovation of HD included stunning close-up of the costuming, the brilliant fabrics, textures, and colors. Juliette’s garment seemed to alternately sweep around her with a heavy, majestic richness or float as if gossamer. 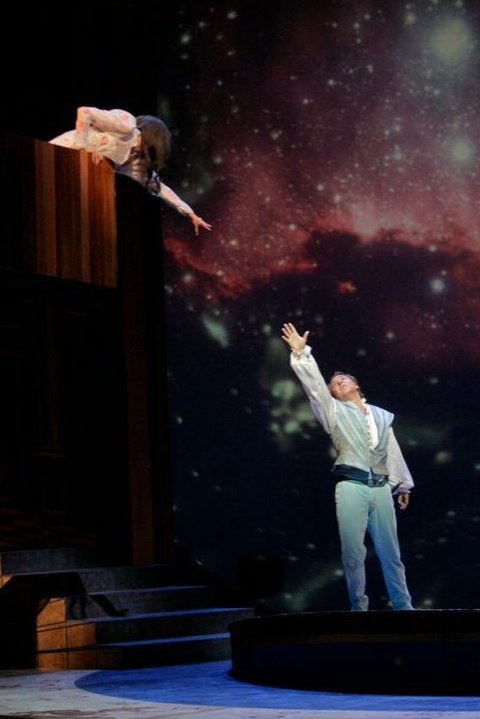 If there was a problem with the broadcast, it was in the occasional dips in volume that made the start of the performance seem too soft; the volume was adjusted and the balance of the performance was appropriately audible.In high definition and stereo, the opera played to 600 movie theaters around the world, include two in Nashville (Green Hills and Opryland). For $22 a ticket, it seemed a cheap price to pay for not just front row center at the Met but the kind of close-ups the Met audience might not see. Placido Domingo, who sung the role of Romeo in the past, stepped to the podium for this production.

Live from the Met HD continues January 1, 2008, with the broadcast of a new production of Humperdinck’s Hansel and Gretel.