During a luncheon prior to Commencement today, the Austin Peay State University Distinguished High School Teacher Award was presented to a Stewart County High School teacher with a reputation for “going the extra mile for her kids.” 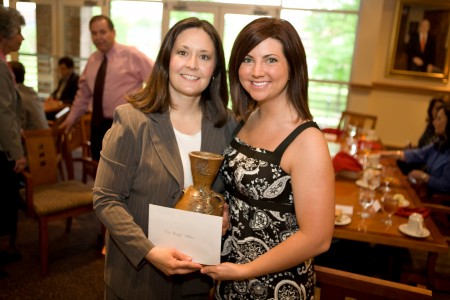 The Distinguished High School Teacher Award, given annually, recognizes a high school classroom teacher who had a significant impact on the success of a graduating APSU student. This year’s recipient, Cheryl W. Wooten, R.N., (L) was nominated by her former student, Sara Sexton, Dover, who received a Bachelor of Science in Nursing during today’s Commencement—thanks to the influence of Wooten.

During high school when Sexton was serving as HOSA reporter/treasurer for the state of Tennessee, Wooten took time out of her personal schedule to travel with Sexton across the state to create leadership opportunities for her students, including planning the state conference.

It was during one of these trips with Wooten that Sexton decided she wanted to become a nurse. “I will never forget one of (my trips with Ms. Wooten) where we attended a gala sponsored by Johnson & Johnson to (pay) tribute to nurses across the state,” Sexton said.

“Before this, nursing had never been a career I had even considered. We spent the ride home that night discussing the rewards of nursing. This was a turning point in my life. Without (Ms. Wooten’s) help, I am not sure that my life would be on this same path.”

According to Sexton, Wooten’s support did not end when she graduated from Stewart County High. Sexton said, “(Ms. Wooten) still keeps in contact, serving as a great resource of information and motivation. Her great enthusiasm and confidence in me has, without a doubt, had a positive impact on my life. ”

Wooten received an Associate of Science in Nursing from Union University in 1983. In 1990, she graduated from the University of Tennessee, Knoxville, with a bachelor’s degree in vocational education. She worked as a registered nurse in Bolivar, Tenn., from 1983-89. She taught from 1986-97 at Bolivar Central High School as a health science education teacher, before becoming an instructor at Stewart County High School in 1997. Wooten has served as the local HOSA adviser since 1986 as well as adviser to nine state officers and one national officer.

During her second year at Stewart County High, Wooten worked with students to develop a community awareness project on tobacco prevention and education, called Kids Against Tobacco Substances (KATS), which has received national honors. Wooten continues to serve as KATS adviser. She is on the Tennessee Association for Career and Technical Education Executive Council and is a board member and secretary for the Brad Butkiewicz Foundation.

As a teacher for 22 years, Wooten enjoys interacting with students outside the classroom. HOSA provides opportunities for her to work with students in class, as well as before and after school, on weekends and even over holidays. She says, “For many years, I thought all teachers were doing the same thing, but I discovered that I was, as others put it, ‘going above and beyond’ for my students. I did not realize I was doing anything special.

“If giving my free time helps these kids, then it is worth every minute, hour, day and week that I spend with them.”

Her principal, Christopher W. Guynn, confirms her deep commitment to students. He said, “(Ms. Wooten) is a teacher that truly makes a lifelong difference in the lives of young people. She is always willing to go the extra mile for her kids, be it grilling chickens on Saturday to raise money for her program or giving up spring break year after year to accompany students on road trips.”

Crediting Wooten with generating interest among students in health occupations, Guynn said, “She has single-handedly built this program from a handful of students to more than 150 students enrolled in health occupations classes from a student body of 750.” Guynn also talked about how Wooten maintains lifelong bonds with her students, saying, “She is a popular teacher. Young people know when a teacher really cares about students.”

Lara Black, school librarian, said, “(Ms. Wooten) is tireless in her efforts to challenge young people to find their best. She models honesty, strong work ethics, fairness and equality. Students admire and trust her. They work hard to meet her high expectations.”

Jordan Perry, 2008 valedictorian for Stewart County High School, said, “(Ms. Wooten) is tireless when it comes to helping HOSA members. Every year, she gives up her spring break and part of her summer vacation so her students can compete on the state and national levels.”

As the recipient of the 2008 APSU Distinguished High School Teacher Award, Wooten received a $1,000 cash award and original artwork by Ken Shipley, assistant professor of art.

For more information about the APSU Distinguished High School Teacher Award, please contact Carol Clark, executive assistant to the president, by telephone at (931) 221-7570 or e-mail .