HomeNewsCPD has a new weapon in its war on DUI's: a...
News

CPD has a new weapon in its war on DUI’s: a portable booking station on wheels

Clarksville roads are a bit safer today due to a group of highly dedicated men and women who got together last night for a joint Clarksville Police Department DUI Enforcement and the Montgomery County Sheriff’s Department DUI roadblock. Approximately 450 vehicles passed through the checkpoint during its operation between 11 p.m. and 1 a.m., with between 10 and 15 citations being issued for a variety of offenses including not wearing seat belts, falsified registration, driving without headlights, curfew violations, and at least two suspected DUI’s.

This outing was the first for the Clarksville Police’s new DUI trailer. Late Friday afternoon, local police and representatives from the Montgomery County Sheriff’s Office gathered on Vista Lane to unveil the new $27,000 trailer, designed and built by Trailerlogic of Anderson, South Carolina. Mike Richardson, President of Trailerlogic, was on hand for the event and its first deployment Friday night.

“This is the third ‘booking’ trailer we have built for Tennessee,” he explained. The first two were purchasded by the state; this is the first to be acquired for a local police department.

A number of Clarksville Police gathered to take a first hand look at the vehicle, checking out its self-contained “intoxicator,” a breathalizer device that determines blood alcohol levels. The trailer is computer-equipped to allow booking of suspects on the spot, and has two small holding cells with padded seats and a seat-level railing to which suspects can be cuffed.

County Sheriff Jimmy Brown, who said Clarksville Police and his office “often work together in the common interest of saving lives.” Brown was “impressed” with the new vehicle.

The trailer provides a safe location to conduct roadside sobriety tests and helps ensure that when it comes to prosecution the courts have the evidence they need complete with a Breathalyzer test results and video recordings. Inside the vehicle, EMS personnel can also draw blood for testing. Cameras both inside and outside the trailer provide ongoing video documentation of every step from the initial stop to the process of sobriety testing, arrest, booking and lock-up. The trailer is amply lighted inside and out for nighttime use.

“It’s like having a portable office,” said, noting that some people who spot the roadblock turn around an head the other way. They are not pursued, Hurst said, unless they violate some other law (illegal turns) or make a reckless maneuver to avoid the roadblock. “Then we go after them.”

When asked why the public is given advance notice of where the roadblocks are placed, Hurst said prior court action set a precedent and regulation for the advance notice.

Ward 6 City Councilman Marc Harris attended both the official unveiling of the trailer and the checkpoint to show his support for the police officers and to see how well the new trailer served its function. He was the only city representative to show up, and should be commended for doing so.

Even though the checkpoint was for one night only, people should be aware that there will be increased DUI patrols out for the rest of the holiday weekend. If there is one message I can take from this experience watching these officers at work it is: Don’t drive while under the influence, because it’s quite likely that you will be caught and taken to jail.

At the time of the unveiling of the new trailer, Clarksville Police also displayed their recent new award from the state for “Speed Awareness” campaign. 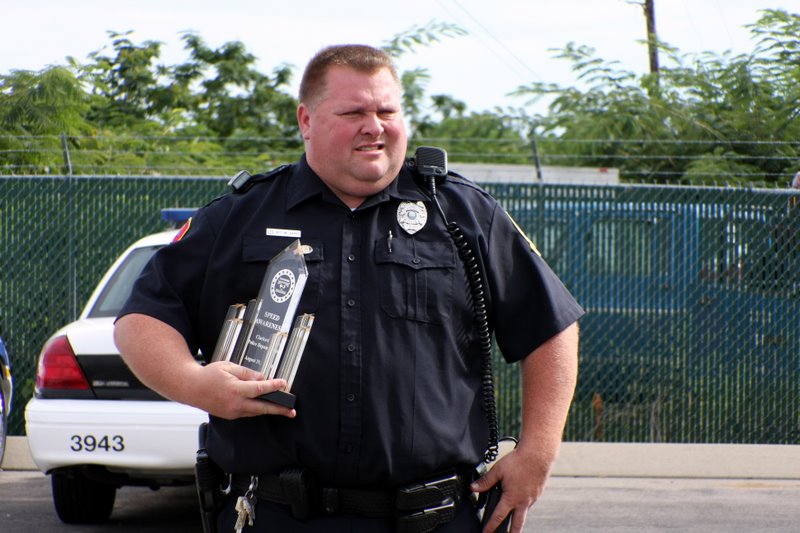