HomeNewsWhat were they thinking? An UZI in the hands of a child...
NewsOpinion

What were they thinking? An UZI in the hands of a child leads to tragedy 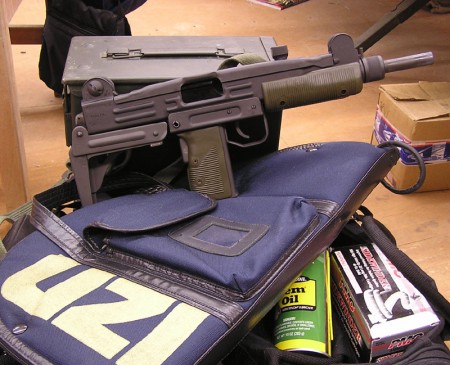 Every time I think I’ve heard it all, I find that I haven’t. This newest jolt came in the form tragedy as an eight-year-old Connecticut boy died Sunday afternoon while participating in a machine gun shoot. You read that right: a machine gun shoot. A game. A contest of sorts. Supervised by gun instructors. At a sportsman’s club. The child “lost control” of the 9 mm Micro Uzi machine gun he was shooting; the force of the gun caused it to travel up and back, resulting in a single fatal gunshot wound to the boy’s head even as his father was recording the event on camera. The boy’s father accompanied his son in the ambulance; the boy later died at Baystate Medical Center in Springfield, Massachusetts. Charles Bizilj, the father, is  director of emergency medicine at Johnson Memorial Hospital in Stafford, Connecticut.

I repeat: What were they thinking?

Christopher Bizilj of Ashford, Connecticut, had parental permission to take part in a machine gun shoot at the Westfield (Massachusetts) Sportsman’s Club’s Machine Gun Shoot and Firearms Expo, where, under the supervision of a certified instructor, he was firing the Uzi in question at a pumpkin (in the Great American Pumpkin Shoot) , a Westfield Police Department report stated. The child had previously used handguns and rifles but had never used a automatic weapon before.The event was organized by C.O.P. Firearms & Training, an Amherst company which organizes machine gun shoots throughout New England.

The boy “was shooting the weapon down range when the force of the weapon made it travel up and back toward his head, where he suffered the injury,” a police statement said. Police called it a “self-inflicted accidental shooting” and added that “the weapon was loaded and ready to fire.” Despite the initial determination of accidental death, the Hampden County (Massachusetts) District Attorney’s Office will conduct an investigation, verifying the certifications of the intructors and the existence of required permits. In the Commonwealth of Massachusetts, which has some of the harshest regulations on firearms in the country, licenses are required for firearms ownership, and the federal Bureau of Alcohol, Tobacco, Firearms and Explosives issues other licenses for machine gun possession.

Knowing that Uzi are weapons in domestic terrorism, in gangs and in foreign wars, I looked up the Uzi in question on the firearms website; my stomach curled. Not necessarily from the weapon itself but from the idea that someone, anyone, would want to place this kind of weapon — regardless of trainers and traning and parental consent — in the hands of a child. An eight-year-old child. A child who, at best, might be taught how to use a BB gun or maybe a 22 caliber rifle — maybe (I was 12 when my dad taught me to shoot, and the gun still left my shoulder bruised from the recoil). In Vermont, my best friend’s son was taught basic shotgun handling at a young age, knowing that moose, coyotes, bobcats, fisher cats, and bears abound around his mountaintop forest home, with only the coyotes posing a problem. He was a teenager before he took certification training for a hunting license.

A bit of Uzi history

The UZI was developed (and hence its name) by Uziel Gal (1924-2002) a captain in the Israeli army who won an internal competition for the design of a new sub machine gun. The first prototypes appeared in 1950 and soon after the first production batches were issued to selected units for field testing. An improved design appeared just before the Sinai Campaign of 1956 and it was in this desert war that the UZI emerged as a winner in the highly demanding surroundings. The UZI turned out to be not only highly reliable, but also surprisingly accurate for such type of weapon, and soon caught the eye of the international firearms community. During the 1960s a new folding metal stock replaced the original wooden stock and the UZI was also licensed to be produced by FN, the Belgian firearms company.

The UZI gained its fame not only in combat, but also as a favorite of elite forces and security services. During the attempted assassination on U.S. President Ronald Reagan in 1981, the press cameras caught one of his bodyguards pulling an UZI from his jacket. In subsequent years the UZI also became a regular feature in dozens of actions movies where it was seen in the hands of Hollywood’s biggest stars.

Weapons of War are not “child’s play”

Surely the Sportman’s Club instructors knew the power and possibilities of placing such a weapon in the hands of a child, and the implication of a machine — it’s not exactly what you use to hunt deer, bear, moose or wild turkeys. Isn’t there a possibility that an Uzi just might  be “overkill.”

In an Associated Press report, both safety experts and some gun owners “are wondering why such a young child was allowed to fire a weapon used in war.”

Speaking on behalf of Stop Handgun Violence (Newton, Massachusetts), Jerry Belair noted that it is “relatively easy to lose control of a weapon like that … they are used on a battleground for a very good reason … to shoot as many times as you possibly can without having to reload at an enemy that’s approaching. It’s not a toy. It’s not something to play with.”

I cannot help but sympathize with the family over the loss of a son at such a young age.  I hope that the communities involved will rally around the family and help them through the tragedy. I hope that in some way the aftermath of this tragedy will incite some needed thought into whose hands we place these weapons.

An internet search of web links to the Westfield Sportsman’s Club turned up “account suspended” notices. The one site still up did not include a listing for the event in question, though a prior web posting said:

“… the event, run in conjunction with C.O.P. Firearms and Training, is ‘all legal and fun.’ People will be allowed to fire weapons at vehicles, pumpkins and other targets.”

In promoting the event, the Sportsman’s Club called the event “fun” and “legal,” and said no permits/licenses would be required to participate. Free handgun lessons, lesson on machine gun use, and rentals would be offered. The club indicated that children “ages 16 and under” would be admitted free. Pistol and rifle shooting were offered to both adults and children.

The private club, which was established in 1949, promotes “the interest of legal sport with rod, gun, and bow and arrow, both directly and through training” and has eight firing ranges in addition to archery and fishing facilities on a 375 acres Westfield site. The club has apparently opted for “no comment.” Phone messages are not being returned.