The two-day, 36-hole tournament will be played on the par-72, 6,017-yard at Miller Golf Course, Murray State’s home course. The tourney will begin with an 8:30am shotgun start each day. In addition to the host Lady Racers and Lady Govs, another Ohio Valley Conference foe, Tennessee State, also will participate along with Belmont, Valparaiso and Western Illinois.

The Racers are four-time defending champs, but Lady Govs senior golfer Chelsea Harris is the defending medalist, shooting 76-79=155 a year ago. Harris will lead a Lady Govs quintet that also will include fellow senior Ashley Wathen along with junior Ashley Averitt and two freshmen, Rachel Deaton and Tala Mumford.

“We are looking forward to getting the Spring season started,” APSU coach Sara Robson said. “The weather has been an issue since the team returned to campus but we have had two good weeks outside. The girls have worked hard and used their time wisely.” 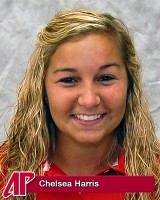 The Lady Govs played their most competitive fall schedule in history and are hoping that will pay off as the spring season begins.

“We have been putting up some good numbers in qualifying and are looking to use that as momentum going into our opener,” Robson said. “We have several players that could make the line-up this semester and we will continue to work hard and build on the strong fall season we had.”