The series will be the first action for the Lady Govs since beating Tennessee Martin, 5-2, Tuesday while Jacksonville State (28-11, 13-3 OVC) was shutout by Alabama-Birmingham, 7-0, Thursday.

Austin Peay is led offensively by freshman Lauren de Castro, who comes in batting .277 on the season, including three home runs and 14 RBI.

The Lady Govs also have received solid plate performances from a pair of red-shirt sophomores, Shelby Norton and Jessica Ryan, who have both hit more than .400 in Austin Peay’s last five games 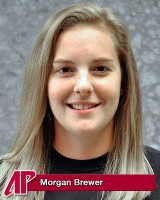 In the circle, sophomore Morgan Brewer tops the Lady Govs pitching staff with a 6-10 win-loss mark this season, including a 4.09 ERA and 60 strikeouts in 113 innings of work. Brewer was impressive in the win against UT Martin, spacing out six hits in the complete-game victory.

Tiffany Harbin is the workhorse for the JSU pitching staff with a 17-5 win-loss mark, including a 2.77 ERA and 171 strikeouts in 128.2 innings in the circle.