“Talon Shock is a realistic and stressful tactical scenario designed to push a platoon, or in this case a squad, to the brink of their physical and mental capacity, as well as build esprit de corps through hardship; in other words, it’s designed to break you off,” said Capt. John Twamley, the brigade’s operations planner and a recent participant of a Talon Shock held July 12th. “The rigors of combat can never be overstated and Talon Shock does a great job of putting that into perspective. Stress is a reality on any deployment and needs to be trained for just like any other Soldier skill.”

The training actually begins early in the week where the First Strike battalion leaders task a unit with a mission, one commonly seen in the Afghan theater. The unit prepares for that mission and then executes that Thursday. In full combat gear and weapons drawn, they move out and as soon as it begins, drastic changes occur to the mission and the participants must react immediately and accurately.

“The mission always changed while we were in Afghanistan and initiating that same scenario here is important,” said Capt. Daniel Plumb, a First Strike operations officer and one of the creators of Talon Shock. “In this particular case, the squad is reacting to casualties that need to be evacuated from the battlefield.”

Talon Shock July 12th, involved a squad made of brigade staffers from Strike initially assisting the First Strike battalion by providing reconnaissance for a Talon unit during the training scenario. After hearing word of the casualties, the recon squad received orders to change mission and air assault from a CH-47 Chinook Helicopter, eliminate the enemy threat and evacuate the wounded.

“The mental stress is achieved through 180-degree changes to the scenario, which tests a unit and its leader’s abilities to adjust on the fly to accomplish the new mission and the physical stress comes from moving constantly, over rough terrain, carrying a heavy load like casualties,” said Maj. Curtis Rowland, the brigade’s executive officer and the recon squad leader for the mission. “Training in this manner develops agile and adaptive leaders and units.” 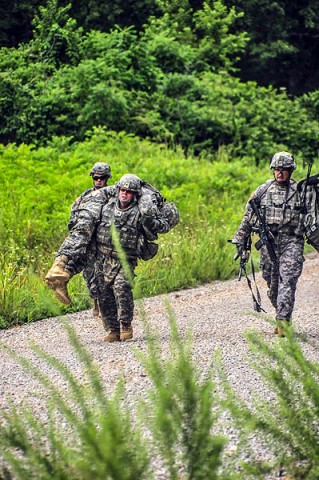 During the training, the units are equipped with simunitions called Ultimate Training Munitions, a non-lethal ammunition that is projected through the Soldier’s weapon and leaves a paint mark on its target. The Strike Soldiers use blue paint and the opposing forces use orange. The realistic training is consistent throughout Talon Shock and is well received.

“Realistic training is a must and training with simunitions introduces a feel of realism because you can hear the sim rounds as they fly by,” said Rowland. “Sims afford the effects of covering fire, keeping the enemy’s head down as an element maneuvers and when training, we must always strive for the most realistic training possible because it simulates combat conditions.”

Once the bird landed, the squad exfilled the helicopter, located the casualties in the field, performed care-under-fire procedures while orange sim rounds flew over and reported to higher their updated situations, just like they had done while in Kandahar during OEF 10-11. The squad eliminated the attacking enemy and battle buddy carried the wounded a half a mile to the medical extraction point. Their injuries included a gunshot wound to the face, an open chest wound and wounds to a leg.

Upon a successful medical evacuation, the squad received intelligence of more enemy units in the area. Their mission continued as they linked up with a team from First Strike’s Headquarters and Headquarters Company, who was now down four men due to the evacuation.

Now patrolling in the wooded area with a compass and GPS watch, they searched for enemy combatants and a potential weapons cache. The Talon Shockers moved through dense vegetation for two miles then enemy gunfire was heard.

Another firefight pursued and lasted for twenty minutes. Enemy forces again were eliminated and the squad had found a large weapons cache. Another mile away was their next extraction point and had to figure out how to bring the cache with them, a crate weighing 300 pounds. Using a medical liter, they started dragging the cache.

A half-mile into the extract they were ambushed from all sides. Taking cover and returning fire, the enemy fire had ceased again. The squad regrouped and completed their Talon Shock in a total of five hours.

The Talon Shock started as a recon mission and ended with completely different scenarios on the other side of Fort Campbell as Strike continues to be ready for future operations and awaits for its advisory teams to return home.

“We planned on doing a recon mission and ended up taking a CH-47 to help a platoon under enemy fire,” said Twamley. “From a training perspective it was realistic because we used Ultimate Training Munitions and actually shot each other. It is imperative to train as you fight and the Strike Soldiers at Fort Campbell will achieve and maintain proficiency in critical collective tasks at the squad level and platoon level so we can seamlessly integrate Team Strike back into our ranks upon their redeployment and avoid completely resetting the Brigade as we prepare for our next rendezvous with destiny.”