The Toughest Air Assault Soldier Competition is one of many events held during Week of the Eagles. Thirty three teams entered the competition which featured a 12-mile foot march, obstacle course, written test, sling load test, and rappelling. This year’s Week of the Eagles celebrates the 70th anniversary of the 101st Airborne Division. 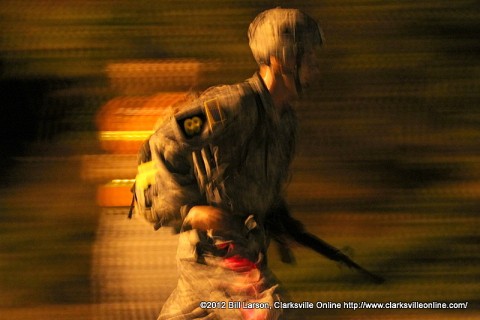 Then after removing their Ruck march gear, the soldiers moved on to the obstacle course.

While completing the Ruck march had to be tough, doing this challenging course immediately afterward had to be pure torture. The obstacles included:

And what must be one of the toughest obstacles…

After this the intense physical exertion of the morning complete, and it was testing time. The soldier’s knowledge of the procedures and requirements of their job as an Air Assault Soldier were confirmed. Following which the contestants were put through a practical test where they had to prep a package for sling loading.

The final activity was a mystery event which in this case was an air evacuation exercise. This contest and its various stages were designed to put the soldier through the various tasks they would be required to fulfill during their time as member of the 101st Airborne Division (Air Assault), and every one of these soldiers takes that job very seriously.