The Governors finished Tuesday with a 297, ending with an 897 total. Louisiana-Lafayette was second at 899 followed by host Memphis (906), Louisville (910) and Vanderbilt (912). They were able to outdistance a field that including six teams ranked in the Top 100, three in the Top 50, from the most recent GolfWeek.com ratings.

“What a tournament,” APSU coach Kirk Kayden said. “It just went back and forth all day today, but our guys really came up with some clutch performances, especially down the stretch.”

“Louisiana-Lafayette shot that incredible 283 yesterday and they made a run at it. Memphis got off to a great start and had us down six or seven shots at one point. But we had the hard holes first (out of the shotgun start), and when we got to some of the easier holes on the course our guys made some real clutch shots.”

It was the Govs’ fourth tourney win this season—and fourth in their last six. APSU has yet to finish outside the Top 5 in a tournament. But this one will be one for Kayden and his Govs to remember.

“When you consider the conditions—the freezing cold, the teams we were playing, I know in my nine years we have not had a better win,” Kayden said. “This was almost like an NCAA Regional Field. I told our guys this win was due to all the hard work they had put into practice this winter in all sorts of conditions and never saying a word. I was proud at how my guys just kept grinding it out.” 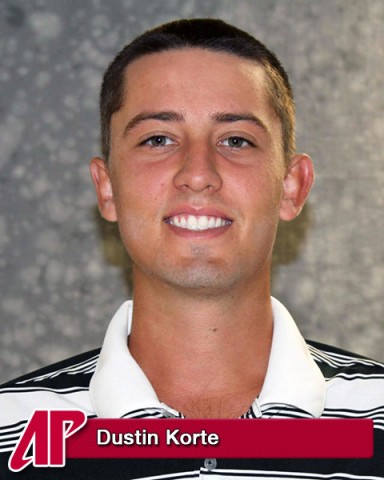 Korte proved to be the Govs’ senior leader the entire tournament, finishing with a 2-over 218, three shots ahead of Vanderbilt’s Jordan Janico. He finished Tuesday with an even-par 72, with only one hiccup. Starting on No. 8, he was able to get his final round to minus-2 before a double bogey on No. 4 brought him back to even. However, he shrugged off the double to finish with pars on the final three holes.

“Dustin has been close a number of times individually,” Kayden said. “It was good stuff. It was great to see him get a win like this, especially late in his career. To win one of these is so difficult to do, especially in these conditions and the field we were playing. You just have to be mentally tough to accomplish something like that.”

Korte said it was a good feeling to win, but it was a team effort all the way.

“I was worried that my double-bogey was going to cost us the tournament, but I wasn’t nervous, I stayed calm and just tried to finish strong. I’m definitely excited, it’s an awesome feeling. It hasn’t sunk in yet, but we’ve still got a long way to go to accomplish what we want” said Korte.

Bradley was consistent during the entire tourney, shooting a 1-under 71, to earn a share of fourth place with a 6-over 222. Opening on No. 7, the defending OVC champ had a bogey on No. 9 before recording birdies on Nos. 11, 16, 18 on the back nine, with only a bogey on No. 15 slowing him down. He also had a bogey on No. 5, but quickly rebounded with a birdie on the par-4 No. 6 to end the day with the Govs’ low score.

Iten, meanwhile, found himself 4-over after just six holes played and then had another bogey on No. 18 before collecting himself for the final seven holes. In fact, he showed why, entering this tourney, he had been the Govs’ best golfer this spring. He had birdies on Nos. 4, 5, 6 to bring his score down to 2-over. The birdie on No. 5 was especially impressive in that it came on a par 3. Iten finished with a 74 on the day and 226 for the tourney, tying for 12th.

Sophomore Tucker Wallace, who was solid all day Monday, struggled some on Tuesday. Starting on No. 9, he was 5-over after 10 holes and then had bogeys on No. 3 and No. 4, but righted himself over the next three holes for par before a final-hole bogey when everything was all but decided. He finished with an 80 and an overall 231, tying for 29th in 89-man field. 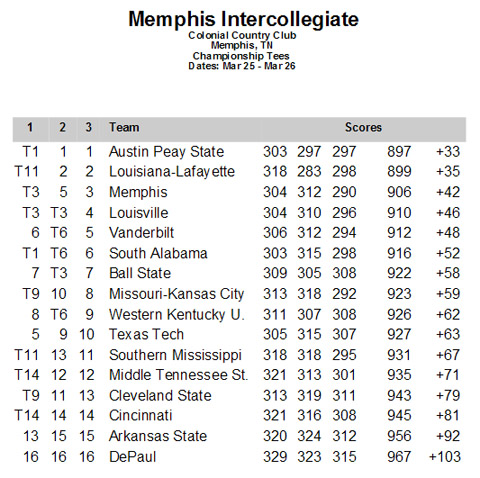