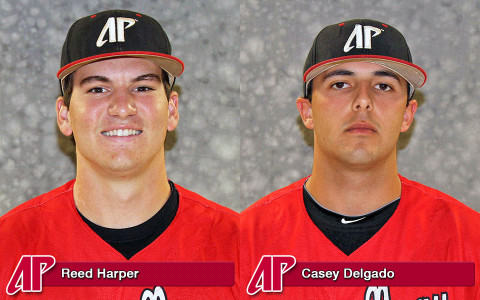 In addition, Delgado was named one of four Louisville Slugger National Players of the Week, selected by Collegiate Baseball Newspaper.

Delgado struck out 16 batters – most by a Gov since APSU Hall of Famer Tom Morgan struck out an APSU record 17 in 1958 – and tossed a complete-game three-hitter to defeat the Skyhawks, Saturday. He faced two over the minimum (29 batters) and retired the final 22 hitters of the contest.

His 16 punch outs were most by an OVC hurler this season. The Miami native struck out at least two batters in every inning except the sixth – when he retired the side on six pitches. He also failed to issue a walk in the contest, the second time this season he hasn’t issued a free pass; he allowed no walks in seven innings at Murray State, March 29.

His performance elevated him to the top of the conference in strikeouts (88) and tied him with Tyler Rogers for most victories among Govs’ pitchers in 2013.

Massoni made it two weeks in a row and three times this season he’s earned at least a share of the OVC’s weekly honor. The Danville, Calif., native was 9-for-14 on the weekend, collecting three hits in each game against the Skyhawks.

He opened the series with a 3-for-5, two-home run, five-RBI performance in a 9-5 victory, with his first-inning, three-run blast securing the lead for good and his second making him the second Gov in as many weeks with a two-home run game – P.J. Torres hit two out, including a solo walk-off in the Govs’ series-opening victory against Morehead State.

He ‘only’ went 3-for-4 in the second game, and finished the series with a 3-for-5, two-RBI Sunday performance that included a solo home run and an RBI double.

Massoni ended the weekend leading the OVC in all three Triple Crown categories – his .391 batting average is 16 points ahead of Morehead State’s Kane Sweeney, while he’s tied with Tennessee Tech’s Zach Stephens in home runs (16) and RBI (60).

The slugging first baseman takes over the team lead in weekly OVC honors by a Bat Gov. Massoni now has three weekly honors; senior outfielder Cody Hudson and senior closer Tyler Rogers have two apiece, while Delgado and senior shortstop Reed Harper have been tapped as the best the conference has to offer one time each.