Fort Campbell, KY – The Medal of Honor is our Nation’s highest military honor awarded for valor.  It is for conspicuous gallantry and intrepidity at the risk of life above and beyond the call of duty, and is awarded by the president of the United States on behalf of Congress.

To someone who does not know the true meaning of the award, it may be viewed as merely a medal that hangs around one’s neck, but it is much more than that. It is prestigious and comes at great sacrifice and selflessness.

Soldiers, families and friends from 1st Battalion, 5th Special Forces Group (Airborne), also known as The Legion, gathered together the morning of June 5, at the battalion’s operations complex to reflect on the true bravery and selfless actions of a fellow Special Forces Soldier.

Maj. Charles Q. Williams was awarded the Medal of Honor for his acts of valor while defending a Special Forces Camp in Dong Xoai, Republic of Vietnam, in June 1965.

Williams was a Special Forces lieutenant when his acts of gallantry merited the Medal of Honor. He defended a base camp against a violent attack from a hostile enemy that lasted for 14 hours. He was wounded four times during the attack and did not falter as he continued to lead the defense until all personnel were evacuated.

Part of the citation reads, “Despite resurgent Vietcong gunfire, he directed the rapid evacuation of all personnel. Throughout the long battle, he was undaunted by the vicious Vietcong assault and inspired the defenders in decimating the determined insurgents.” 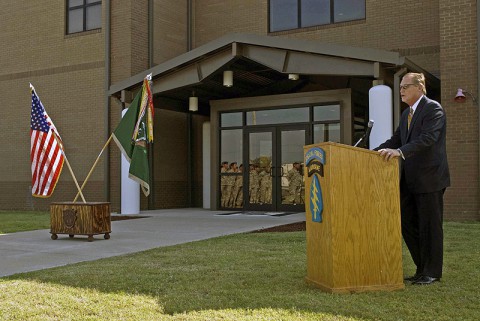 “Although I did not personally know Maj. Charles Williams, I feel like I know of him,” commented Lt. Col. Andrew Hanson, commander of 1st Bn., 5th SFG (A). “I see a piece of him in every Special Forces Soldier that walks these halls.”

Even though it has been roughly 40 years since the conflict in Vietnam, there is a common bond of duty between the generations of Special Forces Soldiers past, present and future. Green Berets of the 5th SFG (A) have taken part in various conflicts throughout the last four decades many more earning awards for valorous selfless sacrifice, all to fulfill a duty to others who cannot fight for themselves; all to liberate the oppressed.

A bronze plaque hangs at the entrance of the newly dedicated Williams Hall reminding Soldiers of the true embodiment of a Special Forces Soldier and why they fight.