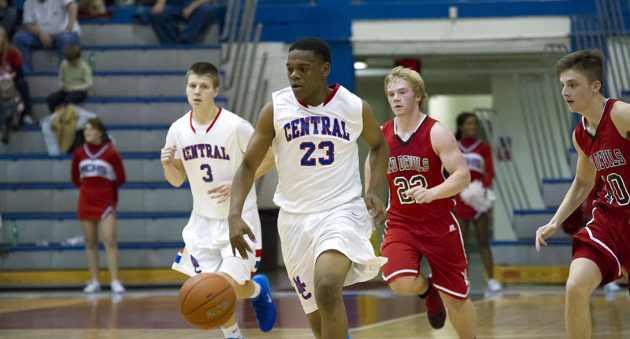 Clarksville, TN – With both teams playing at a slow methodical pace for most of the night, Montgomery Central was able to build a 16-point late in the third quarter, Nov. 14th at the Thomas-Young Gymnasium, before coming away with a 40-31 Hall of Fame Game victory over the Jo Byrns Red Devils to open the season.

Both teams struggled early on to score, with the Indians (1-0) holding a two-point advantage, 6-4, with 2:22 left in the first quarter.

But Montgomery Central finished the period by scoring the final six points to take a 12-4 lead after the first eight minutes of play.

The second quarter would see Montgomery Central slowly start to pull away in the final five minutes of the first half, extending a seven-point advantage, 14-7, out to 12 points at intermission, with Dalton Perkins and Lamont Smith scoring all but two of the Indians points in the quarter.

Smith would lead the Indians with 14 points, while Perkins added 12 points.

The second half would open with both teams falling to score for almost three minutes, before Smith would knock down the first shot of the third quarter with 5:09 left.

Montgomery Central would build its largest lead of the night at the 4:01 mark, 27-11, following back-to-back baskets by Smith and Trey Burney, but settled for a 14-point advantage heading into the final quarter, 29-15.

Burney was limited most of the night due to foul trouble, finishing with just six points.

The final quarter would see the Indians still hold a 16-point advantage, 36-20, with 3:48 left following a basket by Smith, but the Red Devils wouldn’t go quietly.

Jo Byrns would get back-to-back buckets from Triston Timmons and Kaelin McGee to get to within 12, with 2:56 left.

Smith would hit a shot for Montgomery Central to get the margin back to 14, with 2:19 left and after trading baskets till led by that same 14 points, 40-26, with 47 seconds left.

Jo Byrns would score the game’s final five points – including a three-point play by McGee with 25.8 seconds left — to get the margin under 10 points for the first time since midway through the second quarter.

Montgomery Central returns to action Nov. 21st, as they travel to Clarksville Academy for a battle of two in-county teams.