“I consider myself as fortunate to have served as a Currahee and I very rarely say last, because the one truth with service to our nation is that change is constant, and last happens very rarely,” said Keaveny. “I am eternally honored to serve as the fourth commander of the 4th brigade, and I’ll be a Currahee forever.”

Having the opportunity to serve as a Currahee and be part of the unit’s legacy is still a possibility for Soldiers.

“I want to make one thing clear, although we may be inactivating the 4th Brigade, we are not inactivating the Currahees in the 101st Airborne Division,” said McConville. “The 506th Infantry Regiment, the Currahee’s legacy and spirit, will remain alive and strong within this division.”

The Currahees of the two 506th Infantry battalions will not have a far move as they are both realigning with sister brigade combat teams.

“The Red Currahees of the 1st Battalion, 506th Infantry [Regiment], will maintain the regimental colors and join the 1st Brigade Combat Team ‘Bastogne’ with whom they previously fought alongside during WWII,” explained McConville. “The White Currahees of the 2nd Bn., 506th Inf. Regt., will join the 3rd Brigade Combat Team ‘Rakkasan’, with whom members of the 506th fought alongside during the Vietnam War.”

Having fought alongside their gaining BCT will only help to build on the already substantial Currahee reputation.

“The Currahees have a reputation: we assembled in World War II, fought and then inactivated; we reassembled for Vietnam, fought for four years, then transformed; we then went to Korea, then inactivated; we have now fought for four years through this war and we are realigning and transforming,” said Keaveny. “The Currahees have fought for nine and a half years in combat with the 101st; the only battle we missed was Desert Storm. I know that when our nation has a significant fight on its hands again, the Currahees will assemble and fight to the same high standards.” 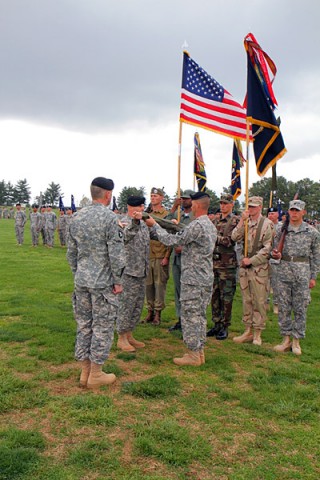 The Red and White Currahee Soldiers continue to train to maintain those high standards even as they transition to their new area of operation.

“Today is not an end, but merely a transition for the Currahees,” said McConville. “As the 4th BCT, under the superb leadership of Col. Keaveny and Command Sergeants Major Grinston and Velez, the Currahee Soldiers on the field have performed magnificently.”

As the 4th Brigade battalions marched across the parade field, conducting a final Pass in Review, Keaveny stood side-by-side with Currahee Veterans, observing the end of the brigade’s current chapter.

“I think about 72 years of Currahee history and 10 years of 4th Brigade history,” said Keaveny. “I think of the [approximately] 1,400 names on our memorial wall, and I think about the fact that we have committed ourselves to live up to their sacrifice every single day.”

Honoring that sacrifice, the Currahee Memorial will be relocated to the Don F. Pratt Museum and the 506th Regimental colors will still fly, ensuring that the legendary name will live on.

Better Business Bureau lists 12 Holiday Scams to watch out for