Most recently an assistant coach at Cuesta College, Fanning takes over as Austin Peay’s pitching coach – a role available after the departure of Joel Mangrum, who left in July to assume a similar position at New Mexico State. 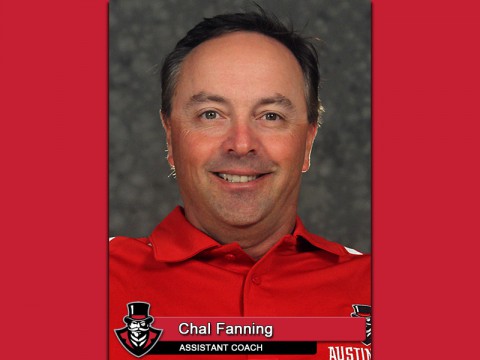 In addition, assistant coach Derrick Dunbar, who was elevated to full-time status this summer, will take over the Govs recruiting coordinator duties.

“I believe we were fortunate to find Chal and he will be a good fit for our program,” said McClure. “Among all the candidates, his experience as a pitching coach really stood out. Chal has recruited and coached top-level talent wherever he has been. He will be able to help our program maintain its high standard going forward.”

Fanning, who brings 20 years of coaching experience to Clarksville, has previously coached at Division I members Missouri and Cal Poly. In seven seasons at the Division I level he has coached or recruited 49 student-athletes who eventually played at the professional level.

“I am appreciative and thankful for the opportunity Austin Peay and Gary have given me to be part of such a successful baseball program,” said Fanning. “It is exciting to be back on the field surrounded by Division I student-athletes. I am forever indebted to and want to thank everyone who has helped me get back to this level as a coach again. I particularly want to thank my wife, Michele, who has been my biggest supporter in helping me achieve my goals.”

This will not be Fanning’s first Division I experience, he spent six seasons at Missouri (1997-2002) as that program’s pitching coach and recruiting coordinator. While in Columbia he coached or recruited 19 All-Big 12 selections, including Jody Harris, the 1999 Big 12 Newcomer of the Year. That effort also included three All-America selections, six freshman All-America picks and four professional players: Justin James, Shawn Marcum, Ian Kinsler and Kyle McClellan.

After his time at Missouri, Fanning returned to Cal Poly, his collegiate alma mater, where he was the recruiting coordinator and assisted in offensive and defensive development of student-athletes. Again his coaching and recruiting efforts paid dividends with 10 all-conference selections, two All-Americans, one conference player of the year and 16 future professionals among the players he coached or recruited.

While with the Mustangs, he recruited Bud Norris, now with the Baltimore Orioles, and coached Garrett Olsen, who played parts of six seasons at the major league level.

Fanning also has kept in touch with collegiate baseball through his management of the SLO Blues collegiate summer baseball league team. In 12 seasons spanning two stints with the program, he has compiled a 425-226 all-time mark winning to California Collegiate League titles and two Coach of the Year citations. Major league players passing through his program include Brian Fuentes, Casey Fien, C.J. Cron and Kyle Hendriks.

Fanning played collegiately at both Cuesta College and Cal Poly. In his freshman season a Cuesta, he led the team in wins (4) and strikeouts (43) and left with the program’s career marks for appearances and strikeouts. He then transferred to Cal Poly where he was a member of the 1992 third-place Division II World Series team. Fanning served as the closer of that team and collected four saves. In regional play that season, he picked up a save and started the final game, leading Cal Poly to a World Series berth.