Clarksville, TN – Long before the release of his new co-created comic book, titled “My Name is Proxy,” Barry Williams made a career for himself helping other writers and artists make their creative visions a reality.

In addition to his duties as a husband, father and teacher, Williams has worked as a colorist on numerous independently released comic book titles, including “Iron Ghost,” “Atomik Mike,” “Monsterpocalypse,” “Red Dwarf: Prelude to Nanarchy” and “Ghost Whisperer.” 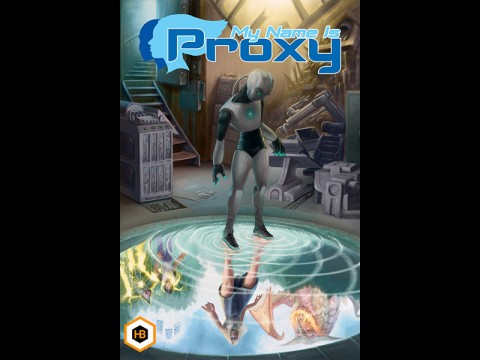 But while his work has been well received and certainly helped pay the bills, the Austin Peay State University graduate had grown tired of helping other people create, while his own ideas were often pushed to the side.

“I’m so happy for the opportunity to work (in the comic industry), but I didn’t get into this to just work on other people’s comics,” Williams, a Clarksville resident, said. “By the time I saw the other projects I was working on, I was the fourth person to touch the comic; I wanted to start to do my own thing.”

Classmate and APSU alumna, Heather Walker could relate to Williams’ struggle. Herself a talented artist, Walker puts her degree to work as a media design specialist for a manufacturing company, directing videos and overseeing the company’s online training program.

Each successful in their own right, Williams and Walker found themselves in a unique position – while their talents and training were paying the bills, what if the two long-time friends came together to create something they could call their own?

“We found ourselves in the position where we did not need to do this to make money,” Williams said. “We both have full-time jobs, now we can just do something for the sheer thrill of telling a fully realized story that belongs to both of us.”

Taking the name HB Collaborations, the duo set about conceiving, drawing and writing a story they wanted to tell. After years of crafting, HB Collaborations recently released their first work: a 28-page comic book, titled “My Name is Proxy.”

The first issue of “My Name is Proxy” tells the story of Search and Recovery Unit 11, or SR-11, for short. Tasked with preserving the remnants and memories of humanity following an extinction-level event that wiped out all human life, SR-11 quickly finds herself on an adventure that explores what it really means to be alive.

“SR-11 is built to go out and find memories. She can scan things like a phone or computer, and put together pieces of memories from their former owners,” Williams said. “When we meet SR-11, the way she’s acting and going about her day is a reflection of her mission and her capabilities; it’s all based on the idea of cognitive schema, or how we form scripts of behavior based on the things we have absorbed into our brains.

“As a result of her mission, SR-11 has begun to interpret her mission of preserving the human existence by actually trying to ‘become human’ herself.”

The project, one that Williams said he hopes will be the first of many with Walker, was a complete collaborative effort, with Williams and Walker each creating the concept, art and dialogue.

“With Heather and me, it’s very difficult to establish where one of our jobs ends and the other’s begins,” Williams said. “It’s sort of like a game of ping-pong, because I’ll have an idea and Heather will expand on that idea, and visa versa. Sometimes, I’ll sketch an idea and give it to Heather, and she’ll give it back with her take on the idea and sometimes, that will lead to a version that’s a mix of both of our takes.”

Since the first issue’s release, Williams and Walker have made the rounds, appearing at Wizard World Comic Con Nashville, as well as Daycon, Clarksville’s local anime convention. Recently, Williams was on hand to sign copies of the issue at the grand opening of Rick’s Comic City Clarksville.

“We’ve been able to meet a lot of great folks, sell some books and have a good time (displaying at conventions),” Williams said. “One of the most popular questions we’ve had is ‘when is the second issue coming out,’ and our answer is always ‘not soon enough.’”

For more information on “My Name is Proxy,” or to order of copy of the first issue, visit HB Collaborations online at www.hbcollaborations.com, or on Facebook at www.facebook.com/mynameisproxy