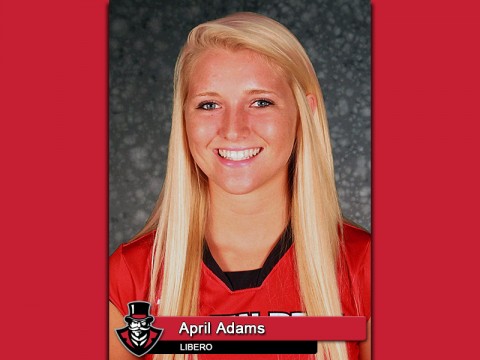 In addition, she did not commit a reception error in 33 attempts and posted four service aces. Adams shared this week’s award with Tennessee State’s Madison Halterman.

In the weekend’s first match, Adams recorded 28 digs and four service aces at Eastern Illinois, Friday. She followed that performance with 22 digs at SIU Edwardsville, Saturday. The two performances helped boost Adams into the league’s top three in digs with 4.34 digs per set in league action.

Adams not ranks 14th all-time in career digs (1,153) at Austin Peay after breaking through the 1,000-career dig mark earlier this season. With six matches remaining this season, she is seeking to become only the 12th Lady Govs defender to reach 1,200 career digs.

It is the second time this season an Austin Peay volleyball player has received one of the league’s weekly honors. Sophomore Ashley Slay was named Offensive Player of the Week, September 7th.

Austin Peay continues a five-match road trip when it faces Tennessee Tech in a 7:00pm, Friday contest in Cookeville, TN.