Nashville, TN – The Tennessee Titans open the 2016 regular season at home against the Minnesota Vikings on September 1th1 and host the Super Bowl Champion Denver Broncos on December 11th. The Titans also will appear in a Thursday night primetime contest against the Jacksonville Jaguars at Nissan Stadium on October 27th.

“Opening up with Minnesota, a playoff team, will be good test for us at home,” said Titans head coach Mike Mularkey. “We haven’t opened up at home since 2012, it will be nice for our fans – opening day for our fans, there is nothing like it.”

“Then we have a stretch of 12 games until the bye, but we do have the opportunity to play a Thursday night game which acts like a mini-bye in the middle of the season. I think it is a pretty fair schedule. I like where the bye is at the end of the year as opposed to the beginning of the year like we had last season,” stated Mularkey.

“The first thing I always look at when the schedule comes out isn’t where is the bye or the opener but what does December look like as we try to get on a roll at the right time of the season and it is good that we have two of the last four games at home. Nothing in this schedule stands out as unique, which is a good thing. All of our opponents will be tough and we will be tough for our opponents,” said Mularkey. 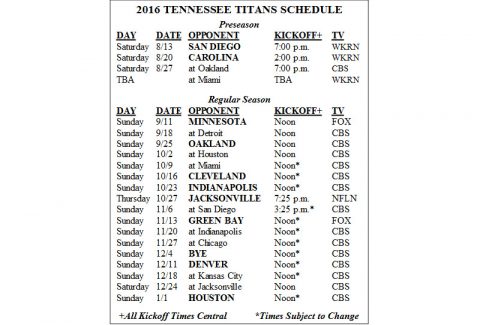 Also, a select number of games are being “cross-flexed,” moving between CBS and FOX to bring potentially under-distributed games to wider audiences.

For Week 17, the Sunday night game will be announced no later than six days prior to January 3rd. The NFL schedule does not list a Sunday night game in Week 17, but an afternoon game with playoff implications will be moved to that time slot. Flexible scheduling ensures quality matchups in all Sunday time slots in those weeks and gives “surprise” teams a chance to play their way into primetime.