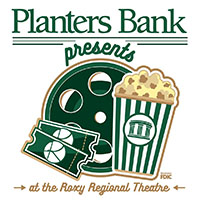 Clarksville, TN – The “Planters Bank Presents…” film series next movie will be Disney’s “Frozen”. This movie will be shown this Sunday, January 15th, 2017 at the Roxy Regional Theatre at 2:00pm.

“Frozen” is about optimist Anna as she sets off on an epic journey-teaming up with rugged mountain man Kristoff and his loyal reindeer Sven-to find her sister Elsa, whose icy powers have trapped the kingdom of Arendelle in eternal winter.

Encountering Everest-like conditions, mystical trolls and a hilarious snowman named Olaf, Anna and Kristoff battle the elements in a race to save the kingdom.

Admission to each film in the “Planters Bank Presents…” series is $5.00 (cash or check only). Tickets are on sale now at the Roxy Regional Theatre box office. Tickets will also be available at the door one hour prior to showtime.

Popcorn and bottled water will be available as concessions.

This film series at the Roxy Regional Theatre is made possible by the generous support of Planters Bank and the Clarksville-Montgomery County Arts & Heritage Development Council.