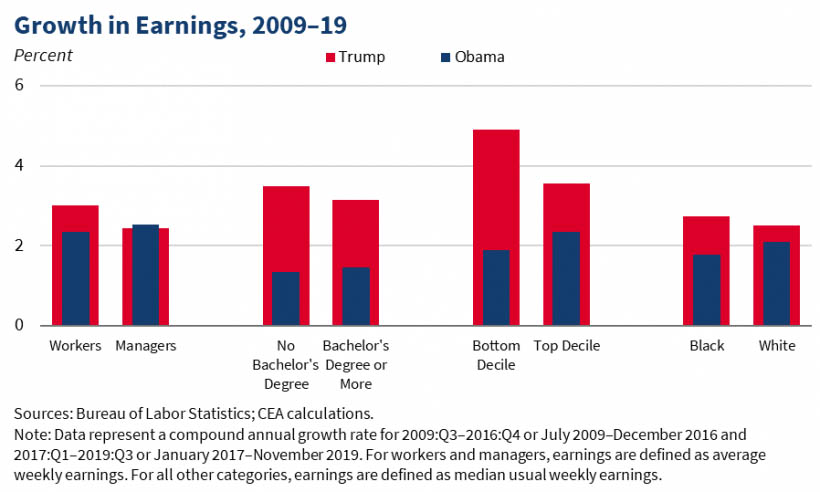 Washington, D.C. – The labor force remains tight, wages are rising, and people are coming off the sidelines to find work, according to new data from the Bureau of Labor Statistics’ (BLS) monthly Employment Situation Report.

Highlights from the report include: the unemployment rate remained at 3.5 percent, matching the lowest rate since May 1969; nonfarm job gains were 145,000, bringing 2019’s total to 2.1 million; the U-4, U-5, and U-6 alternative measures of labor underutilization were all at series lows; and the employment-population ratio for prime-age women increased 0.3 percentage points to 74.4 percent, which is 3.1 percentage points above the November 2016 rate. 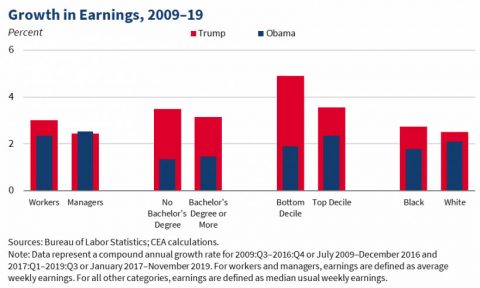 Over 2019, the United States added an average of 176,000 jobs a month. To put that growth into perspective, the U.S. economy needs to create around 70,000 jobs a month to keep pace with working-age population growth.

Any employment growth above this level is typically from workers coming off the sidelines. With employment gains surpassing 100,000 in 34 of the 37 months since the 2016 election, and the economy adding jobs in each month, this is precisely what is happening under President Donald Trump.

In the fourth quarter of 2019, 74.2 percent of workers entering employment came from out of the labor force rather than from unemployment, which is the highest share since the series began in 1990. This influx of workers has brought the labor force participation rate for prime-age adults (ages 25-54) up to 82.9 percent in December—1.6 percentage points above the rate in November 2016.

With monthly payroll employment growth outpacing that required to maintain a stable employment-to-population ratio, employers are raising wages to attract and retain workers. December marks the 17th consecutive month that average hourly earnings growth for production non-supervisory workers has been at or above 3 percent.

This average gain for workers shows how pro-growth policies that raise labor demand and incentivize employers to invest more in their employees have resulted in higher wage gains for historically disadvantaged Americans.

As shown in the figure below, since President Donald Trump took office:

These results are the opposite of those observed over the previous administration’s expansion period, where historically advantaged groups saw higher wage gains.

Few thought these labor market gains were possible before President Trump’s election. The years following the financial crisis were filled with worries that labor force participation had entered a permanent state of decline. Economists and political pundits alike claimed the United States had entered an era of “secular stagnation,” where slow job and wage growth would be the new norm. Now, the same skeptics wonder how long this impressive movement into the labor force can continue. Even with strong recent gains, the booming labor force has more room to grow.

Long-bemoaned trends in labor force participation over the past two decades are not policy-invariant, as the Trump Administration’s pro-growth policies continue supporting higher wages and more people entering the labor market. Thankfully, there is even more room for the job market to expand on the results of December’s Employment Situation Report. This is great news for the American economy—and for the millions of Americans who will be able to build better lives through work.