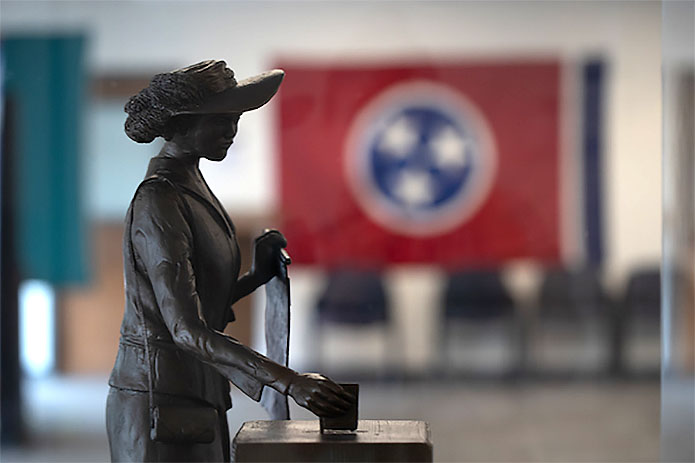 Clarksville, TN – On March 24th at 4:00pm, Paula F. Casey, a dynamic speaker on voting rights, will give the 2022 Betty Joe Wallace Memorial Lecture in the Office of Equity, Access, and Inclusion at 416 College Street on the Austin Peay State University (APSU) campus.

Casey particularly focuses on the 72-year struggle for women to be included in the U.S. Constitution.  She will be speaking on “Tennessee’s Superb Suffragists,” spotlighting the women who organized across the state as well as those men who were allies.

In 2016, Casey published the second edition of The Perfect 36:  Tennessee Delivers Woman Suffrage, a book written by Carol Lynn Yellin and Dr. Janann Sherman. She produced “Generations:  American Women Win the Vote,” a 12- minute DVD that covers the 72-year struggle for American women to win the right to vote. She is the co-founder of the Tennessee Woman Suffrage Heritage Trail (www.tnwomansuffrageheritagetrail.com). She also helped edit the upcoming book “Why Can’t Mother Vote? Joseph Hanover and the Unfinished Business of Democracy.”

She is working to get monuments to the suffragists raised across the state of Tennessee. She served as president of Tennessee Woman Suffrage Monument, Inc., and was primarily responsible for the fund-raising for the monument that was unveiled on Aug. 26, 2016, in Centennial Park.

She served on the committee for Jackson’s statue of Sue Shelton White, the only Tennessee woman jailed fighting for suffrage, which was unveiled on May 25th, 2017, in front of Jackson’s City Hall. She chairs the Memphis Suffrage Monument committee for the “Equality Trailblazers” monument.

A reception for Casey will be held immediately after her presentation.

The Betty Joe Wallace Memorial Lecture is co-sponsored by the Department of History and Philosophy, the Women’s and Gender Studies Program, and the Office of Equity, Access, and Inclusion.  A champion of minorities’ and women’s rights, Professor Betty Joe Wallace pioneered and taught African American history and Women’s history courses at Austin Peay State University for nearly 30 years.

She founded both the African American Studies Program and the Women’s Studies Program. In 1989 the faculty honored her service by presenting her with the Distinguished Professor Award. Between 1965 and 2004, Professor Wallace also trained hundreds of History and Social Studies teachers who served throughout the area.