Washington, D.C. – The cost of gasoline has continued to slide due to falling oil prices. The global oil market has seen lower prices since the United States and its allies agreed to significant releases of oil reserves.

Also weighing down oil prices is the fear of resurgent COVID-19 infections in China and its potential for an economic slowdown in one of the world’s largest oil-consuming nations. Domestically, the national average for a gallon of gas has fallen to $4.11.

“The average price for a gallon of gas has fallen below $4.00 in much of the country,” said Andrew Gross, AAA spokesperson. “And these lower prices may be a boon to drivers hitting the road more as warmer weather returns.”

Although supply and demand factors would have typically supported elevated pump prices, the fluctuating oil price continues to be the main factor influencing pump prices. Pump prices will likely face downward pressure if oil prices remain below $100 per barrel. 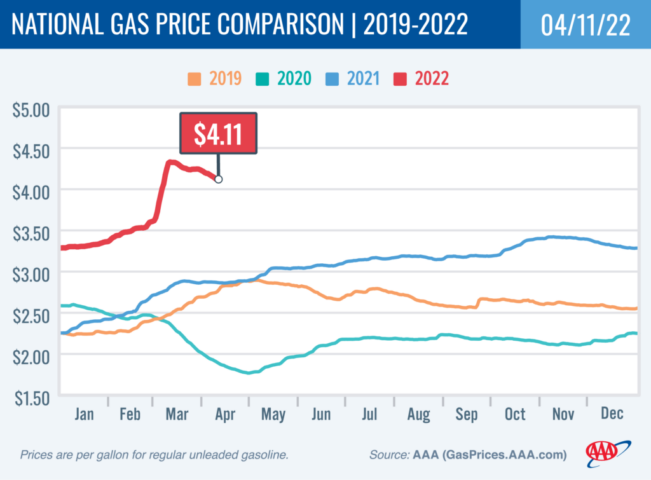 Overall crude prices declined last week following EIA’s weekly report, which showed U.S. crude oil inventories rose by 2.4 million bbl to reach 412.4 million bbl. For this week, crude prices could decline further if the EIA’s next report shows another increase in total domestic supply. Additionally, market watchers will be keeping a close eye on China’s COVID lockdown of Shanghai and the impact it may have on crude oil demand.