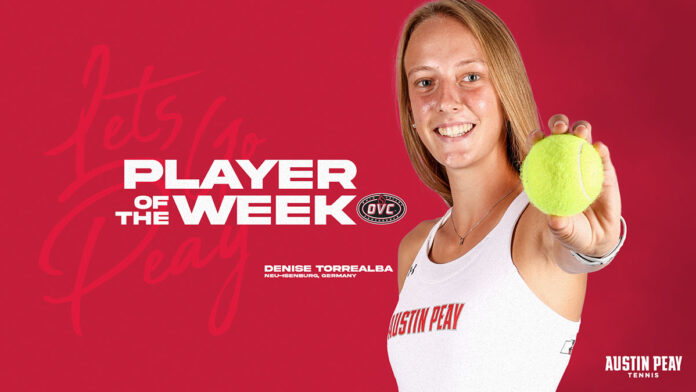 Brentwood, TN – After another perfect weekend on the top singles and doubles lines, the Austin Peay State University (APSU) Denise Torrealba was named the Ohio Valley Conference Women’s Tennis Player of the Week, Tuesday, becoming the first freshman since at least 2010 to receive the honor.

Torrealba led the Governors to a pair of vital victories over the weekend, beginning with a 7-0 win against UT Martin, Friday, at the Skyhawks Tennis Complex in Martin, Tennessee.

The Neu-Isenburg, Germany native won her third-straight match in a 6-2, 6-0 victory against UT Martin’s Jule Streif. It was her third OVC win and sixth straight-set victory of the season.

Following their win against the Skyhawks, Torrealba helped lead the Govs in Sunday’s match against Southeast Missouri in battle for first place in the OVC.

In doubles, Torrealba and senior Honoka Nakanishi gave APSU an early advantage against the Redhawks, defeating Romana Tarajova and Ksenia Shikanova, 6-3 for their ninth win of the season.

The April 12th OVC Women’s Tennis Doubles Team of the Week, Torrealba and Nakanishi lead all Governors’ pairing in wins and have won eight-straight matches in a streak dating back to March 4th. The duo also has been perfect since being elevated to the No. 1 position, on March 8th, with seven wins from the top line.

Torrealba earned one of the most notable victories in her young career in singles against SEMO, winning a three-set match against Southeast Missouri’s Romana Tarajova – the reigning OVC Women’s Tennis Player of the Year.

After winning the first set, 6-4, Torrealba fell in the second set’s tiebreaker, 7-5, before coming back to defeat the two-time First Team All-OVC and 2019 OVC Freshman of the Year recipient, 6-3, in the final set.

Torrealba has defeated the previous two OVC Players of the Year in Tarajova and Eastern Illinois’ Rachel Papavasilopoulos, who ranked first and second in the 2022 OVC Women’s Tennis Preseason Top 10 Rankings, respectively.

With a win against SIU Edwardsville’s Jordan Shifano, on April 10th, and a straight-set victory against Belmont’s Somer Henry during the fall, Torrealba is 4-0 against All-OVC recipients.


Torrealba is the 12th player to be named the OVC Women’s Tennis Player of the Week under head coach Ross Brown, and the first since Danielle Morris, April 14th, 2021.

Torrealba and the rest of the women’s tennis team begin their final week of the regular season at 10:00am, Friday, at the Governors Tennis Courts for Senior Day.