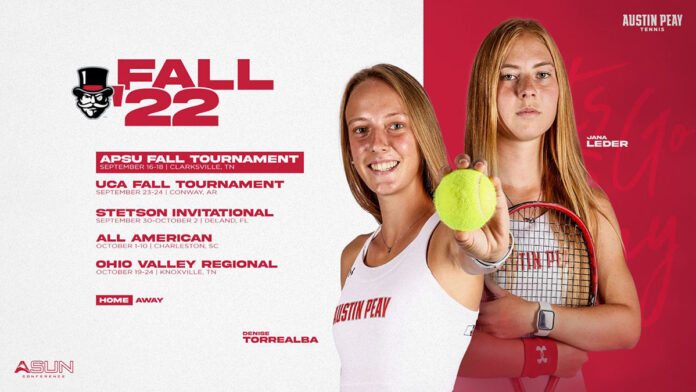 “We’re excited to have the ladies back for a new year, in the ASUN Conference,” said Sorbello Morrison. “With our fall schedule, we’ve added new tournaments and are traveling to some new places. I am excited for the girls to have some new experiences. We begin the fall at home, so we’ll be able to show the APSU community our new players!”

It is the 15th time in the last 16 years the APSU Govs have hosted a fall home tournament. Last season, an impressive start at the event was cut short due to inclement weather. The Govs won four of six singles matches, with all the victories coming in straight sets.

After its home tournament, the Governors travel to Conway, Arkansas for the third time in the last four years for the UCA Fall Tournament, September 23rd-24th.

The 2022 ASUN Regular-Season and Tournament Champions, Stetson was one of the most improved teams in the country last season, going 22-3 (8-1 ASUN) after a 6-10 (1-5 ASUN) season in 2021. The Hatters’ 22 victories were the second-most in ASUN women’s tennis history.

The event is the first time the Governors and Hatters have met since a 4-3 APSU victory, on March 4th, 2019.

A handful of Austin Peay State University student-athletes then could compete in the Intercollegiate Tennis Association All-American Championships, October 1st-10th in Charleston, South Carolina. The last Governor to compete in the event was Carolin Wiekard, the 2010 Ohio Valley Conference Freshman of the Year and a two-time First Team All-OVC recipient.


The Governors wrap up their fall at the Ohio Valley Regional, October 19th-24th, in Knoxville. Alumna Honoka Nakanishi advanced to the Main Draw Singles Round of 32 and Main Draw Doubles Round of 32 alongside Leder in last year’s event. As a team, the Governors won 10 singles and three doubles matches at the tournament last season.