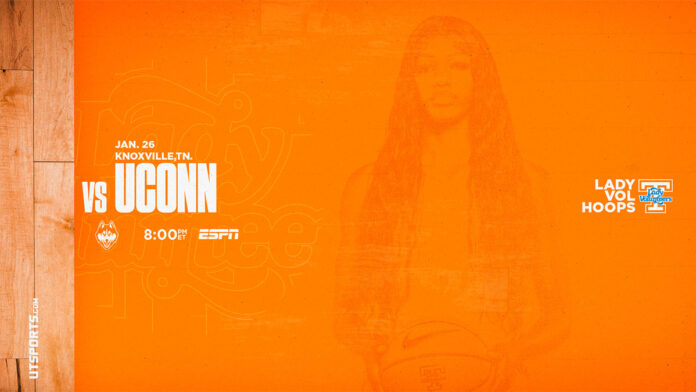 Knoxville, TN – The Tennessee Lady Vols basketball team (16-6, 8-0 SEC), which is receiving votes in both major polls this week, steps outside conference play to meet old rival #5/4 UConn (18-2, 11-0 BIG EAST) on Thursday at 7:03pm CT inside Thompson-Boling Arena in Knoxville.

UT and UConn will meet for the 26th time in a series that dates back to 1995, with the Huskies holding a 16-9 advantage and winning the past three meetings between the programs since the series resumed in 2020 after a 13-year hiatus.

Kellie Harper‘s squad enters on a nine-game winning streak and has been victorious in 14 of its past 16 contests, with its only two losses coming vs. (then) No. 9/9 Virginia Tech (59-56) on December 4th and at No. 2/2 Stanford on December 18th (77-70). A UT win vs. UConn would make for the longest winning streak by the Lady Vols since a 15-game string from November 12th, 2017, to January 11th, 2018. It also would be the longest win spree of the Kellie Harper era, supplanting a pair of nine-game runs a year ago.


Through eight games in league play, UT remains tied atop the SEC standings along with No. 1/1 South Carolina and No. 4/3 LSU at 8-0. It is the Lady Vols’ best conference start since they went 13-0 in 2014-15 en route to a 15-1 league record and regular-season title.

With Jordan Horston out sick on Sunday in Columbia, Tennessee managed to remain perfect in SEC play by getting a layup from Jordan Walker, a three-pointer from Sara Puckett and a turn-around  jumper “and-1” from Rickea Jackson over the final minute to secure a 68-65 victory. Jackson’s bucket and free throw came with a second remaining.

Despite a season plagued with injuries, UConn rolls in to Rocky Top on an 11-game winning streak, with its only losses on the year coming at home to #7/7 Notre Dame (74-60) on December 4th and at #20/21 Maryland (85-78) on December 11th. The Huskies had no trouble at home with DePaul on Monday night, crushing the Blue Demons, 94-51, with four players scoring in double figures.

The only common foe on the teams’ schedules is South Carolina, which UConn hosts on February 5th and Tennessee welcomes to T-BA on February 23rd.

We Back Pat Week

The 12th annual “We Back Pat” Week, a week-long initiative focused on bringing awareness and recognition to the Pat Summitt Foundation, a fund of East Tennessee Foundation, and its fight against Alzheimer’s disease is set for January 19th-26th.

Thursday night’s game will be televised on ESPN, with Ryan Ruocco (PxP), Rebecca Lobo (Analyst) and Holly Rowe (Reporter) on the call.

The Lady Vol Network broadcast also can be heard frequently on satellite radio via SiriusXM and the SXM App. but will not be available this game.

ESPN’s College GameDay Covered by State Farm® is in Knoxville for the first of three women’s college basketball shows this season. The one-hour program will air at 6:00pm CT on ESPN, preceding the storied rivalry of No. 5 UConn and Tennessee that tips at 7:00pm CT.

Elle Duncan will host the show from inside Thompson-Boling Arena, alongside commentators Andraya Carter, Rebecca Lobo, Carolyn Peck, and Holly Rowe. Lobo and Rowe will join play-by-play voice Ryan Ruocco on the call for the game. Carter played for the Lady Vols from 2012-16, Lobo starred at UConn from 1991-95 and Peck was an assistant coach under Summitt from 1993-95.

This will mark the third consecutive time Tennessee has been involved in the four occasions where ESPN’s College GameDay has been on site for a women’s basketball game and the second time the show has visited The Summitt for a Lady Vol contest. Both of those occurrences are the most of any school.

On February 20th, 2022, College GameDay visited Columbia, SC, as South Carolina hosted the Big Orange. The previous visit to a campus for women’s hoops came on January 15th, 2011, when Rocky Top was the site for GameDay as Tennessee hosted Vanderbilt on a day in which the Vols and Lady Vols played at noon and 8:00pm, respectively.

It marked the first men’s and women’s doubleheader show for the network. The year before, ESPN was on hand for the Notre Dame at UConn game in Storrs, Conn., for the inaugural women’s GameDay on January 16th, 2010.


Vols To Host Gameday On Saturday

It also is the only one to host in all three sports during the same school year.

Jaime Nared (30), Diamond DeShields (20) and Jordan Reynolds (17) combined for 67 points to send a sellout crowd of 10,500 at Humphrey Coliseum home unhappy on Senior Day and prevent the Bulldogs from earning a share of their first SEC women’s hoops title.

The Lady Vol point guard did not play in a Jan. 5, 1997, loss at UConn due to a torn ACL suffered in a pick-up game on Oct. 6. Amazingly, though, she rehabbed and returned to action on Jan. 12 vs. Kentucky and played the rest of the season, including a second meeting vs. the Huskies.

Harper (then Jolly) had 19 points and three assists vs. UConn in that contest, which was a victory in the 1997 Midwest Regional Final in Iowa City that sent her team to the Final Four and ultimately an NCAA championship in Cincinnati.


Looking Back At The Missouri Game

Tennessee used an 8-0 run over the last minute to erase a five-point deficit and seize a 68-65 win over Missouri on Sunday afternoon at Mizzou Arena, keeping its conference record perfect at 8-0 and winning its ninth-straight game.

Sophomore Sara Puckett was 7-of-9 on the day in Mizzou Arena and went a perfect 3-for-3 from behind the arc, hitting a game-tying trey with 39.1 seconds on the clock to finish with a season-high 17 points for Tennessee (16-6, 8-0 SEC). Senior Rickea Jackson was also in double figures with 15 on the day, pushing her team ahead with 1.1 seconds left by scoring inside, drawing a foul and sinking the free throw for the final margin.

With 2:17 left in the game against Missouri, Jasmine Franklin pulled down an offensive rebound to bring her career total to 1,000.

She closed out the day with four rebounds, moving her total to 1,001.


Cleaning Up The Paint

A Look At The Huskies

Leading scorer Azzi Fudd (17.9) is out with an injury.

The Huskies outscored DePaul 58-18 in the paint and outrebounded the Blue Demons 59-32.

UT is 7-11 vs. the Huskies during the regular season and 2-5 during the postseason.

The Lady Vols are 2-5 in games played in Hartford and 2-1 on campus in Storrs.

The late Pat Summitt won eight NCAA titles while at Tennessee, and UConn’s Geno Auriemma has claimed 11, making them the most successful coaches in NCAA Division I women’s basketball.

Tennessee will play its second straight top-five opponent and face its ninth currently-ranked foe when it travels to Baton Rouge to take on #4/3 LSU on Monday, January 30th, at 6:00pm CT (7:00pm ET) on ESPN2.