What is the November CDE Referendum about?

The Clarksville Department of Electricity is planning on building a citywide fiber optical network, fiber optic connections would be extended to all homes and businesses in the city. This will allow CDE to: check meters; disconnect and reconnect services; offer custom billing packages, including picking the date for your meter to be read, “Select Billing”; monitor the power distribution grid in real time, instant outage detection, and monitor electrical quality; all from their central office. All services, which Clarksville has a need for.

CDE also proposes to offer other services to help recoup some of the expenses incurred from the building and the maintaining of this network. Services such as Telephone, Cable television, On-demand video, Video-conferencing, Community access TV channels, High speed internet, as well as other services.

As one would expect, Charter Communications is dead set against having viable competition in what they consider their playground, the local Cable Television market.

They whine that public entities should not be competing against private businesses. Why not, I ask? If it is good for the taxpayers and consumers, as this is, then there is absolutely nothing wrong with CDE offering a competing service.

In other Cities that offer municipal broadband, rates from Charter Communications for their services have plummeted as a result of direct competition. I have heard various reports of “expanded basic cable” (Channels 2-78 from Charter) being offered for as much as 16$ per month less than it is currently available for, in Clarksville, TN. Why? Because of a truly competitive option being available to their customers.

Charter communication has not ceased offering services in any of those areas, so one can only assume that they are still making a profit for their shareholders as a result of their presence. What Charter doesn’t want you to think about is because they have a defacto monopoly on your business, they can charge higher prices and get away with it.

The GAO is regularly commissioned by Congress to study whether or not a law is having the intended effect. A case study of one such law (The 1996 Telecom Act) shows:

Charter Communications arguments against this referendum come down to one thing, Spend as much money as you want, on any thing you wish, just please do not compete with us!

Charter Claims: “In February 2006, The Council voted against CDE’s bid to become an authority to offer duplicated cable and high speed internet services.”

This is patently false; the facts are that the Clarksville City Council voted 7 to 6 to approve CDE’s request. However due to a State Government rule, the Tennessee Legislature did not pursue the legislative measures required to authorize the authority.

But that is really beside the point, as CDE is not asking to become an independant authority any more. They are simply asking to expand their service offerings beyond electricity, nothing more, nothing less.

Charter Claims: “This is a very risky business for CDE to get into”

Charter Claims: “Imagine for just a moment, that you a Clarksville resident could write a check for 88 million dollars.”

CDE is not getting 88 million of city taxpayer money, even if you vote to approve this referendum. They are getting the right to acquire a long-term low interest loan, a bond, in the amount of 54 million dollars; backed by the customers of CDE; and over the course of the twenty-year period of the bond, approximately 34 million in interest will have to be paid. That works out to an interest rate of 6.3%. I bet that we all wish we could borrow money with an interest rate that low.

Charter Communications is suggesting that if you vote against this referendum that this will not happen. That is untrue. CDE can still build the network, get a bond for it, at any time without having to ask the voters. The only thing they are asking the voters is for permission to expand their service offerings beyond electrical service. Specifically they want to also provide Cable TV, Multiple Public Access Television Channels, Super High-Speed Internet connectivity, and Telephone Service to begin with.

Does this mean that, Charter claims that they are not making “fat” profits?

If CDE can come in, and garner a small portion of Charter’s business, and still make huge profits, doesn’t this mean that Charter is currently making even larger profits, perhaps much higher profits than they can justify to the citizens of Clarksville, TN?

As a Non-profit municipal entity, CDE can do only three things with extra income above and beyond the cost of providing its services. They can pay down their debt, upgrade their infrastructure, or return it to the ratepayers who paid the money to them in the first place.

CDE can not issue bonuses to its employees or executives; the city charter, which CDE as a municipal entity is subject to, bars them from this. CDE can not arbitrarily go out and give their executives pay raises, or issue dividends to private shareholders. Both Charter and BellSouth can, and do, do this. The money for which comes from only one place, their customer’s (Your) pocket.

Everyone in Clarksville will likely save money when CDE begins offering these services, even if you do not use them for your electricity, cable, Internet, or telephone services.

Charter Claims: “We’d like to believe you would give generously to the community, to support our local heroes, to build affordable housing, to improve parks, and transportation.”

Approving the CDE bond does not stop the city from doing these very things if they wanted to, however CDE could not be involved in doing so, even if they had the desire to be.

Charter claim: “If Clarksville ratepayers have to go 88 million in debt let it be for things that really matter.”

Once again their arguments come down to half truths, and/or outright lies. Why? Because they can not truthfully argue against this on the merits. Their arguments against it are for purely selfish reasons and are based on corporate greed.

False and/or misleading Charter statements on the Referendum

Imagine for just a moment, that you a Clarksville resident could write a check for 88 million dollars. How would you spend it?

Naturally, you would improve your way of life at this time, and you would likely put a substantial amount of it away for your future.

But we’d like to believe you would give generously to the community, to support our local heroes, to build affordable housing, to improve parks, and transportation.

Now if the Clarksville Department of Electricity had their way they’d have you write that 88 million-dollar check so they could provide duplicated cable services, and make a nice fat profit in the process.

On November 7 residents of Clarksville have a big decision to make an 88 million-dollar decision. If Clarksville ratepayers have to go 88 million in debt let it be for things that really matter. On November 7th vote against CDE providing additional services. 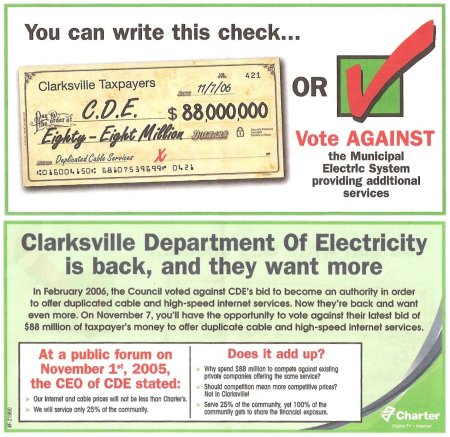