Net neutrality is the principle that on the Internet everyone is equal. That a personal website or a small businesses web site is on equal footing with the largest multinational corporations. It was the founding principle of the Internet. Large corporate interests now want to change that.

They already control your Internet connection and now want to use that gatekeeper status to be able generate more income for themselves by charging content providers for faster access to your Internet connection. If you speed up some, it goes without saying that you must slow down others. Net Neutrality is important to ensure that small independent sites like Clarksville Online can continue to compete and provide an important alternative voice to corporate media.

Clarksville, TN will not be at the mercy of these corporations with alternatives available like CDE’s Fiber to the Home service which is coming soon.

PBS‘s program NOW did a show on this important subject. Lets take a look.

The Save the Internet Campaign compiled a frequently asked questions (F.A.Q) to help explain why Net Neutrality is important, why you should care, and steps you can take. Check it out:

What is this about?

This is about Internet freedom. “Network Neutrality” — the First Amendment of the Internet — ensures that the public can view the smallest blog just as easily as the largest corporate Web site by preventing Internet companies like AT&T from rigging the playing field for only the highest-paying sites.

But Internet providers like AT&T, Verizon and Comcast are spending millions of dollars lobbying Congress to gut Net Neutrality. If Congress doesn’t take action now to implement meaningful Net Neutrality provisions, the future of the Internet is at risk.

What is Network Neutrality?

Network Neutrality or “Net Neutrality” for short, is the guiding principle that preserves the free and open Internet.

Net Neutrality ensures that all users can access the content or run the applications and devices of their choice. With Net Neutrality, the network’s only job is to move data, and not to choose which data to privilege with higher quality service. Net Neutrality prevents the companies that control the wires from discriminating against content based on its source or ownership.

Who wants to get rid of Net Neutrality?

The nation’s largest telephone and cable companies — including AT&T, Verizon, Comcast and Time Warner — want to be Internet gatekeepers, deciding which Web sites go fast or slow and which won’t load at all.

They want to tax content providers to guarantee speedy delivery of their data. They want to discriminate in favor of their own search engines, Internet phone services, and streaming video — while slowing down or blocking their competitors.

These companies have a new vision for the Internet. Instead of an even playing field, they want to reserve express lanes for their own content and services — or those from big corporations that can afford the steep tolls — and leave the rest of us on a winding dirt road.

Decisions being made now will shape the future of the Internet for a generation. Before long, all media — TV, phone and the Web — will come to your home via the same broadband connection. The dispute over Net Neutrality is about who’ll control access to new and emerging technologies.

On the Internet, consumers are in ultimate control — deciding between content, applications and services available anywhere, no matter who owns the network. There’s no middleman. But without Net Neutrality, the Internet will look more like cable TV. Network owners will decide which channels, content and applications are available; consumers will have to choose from their menu.

The Internet has always been driven by innovation. Web sites and services succeeded or failed on their own merit. Without Net Neutrality, decisions now made collectively by millions of users will be made in corporate boardrooms. The choice we face now is whether we can choose the content and services we want, or whether the broadband barons will choose for us.

Congress is now considering a major overhaul of the Telecommunications Act. The telephone and cable companies are filling up congressional campaign coffers and hiring high-priced lobbyists. They’ve set up “Astroturf” groups like “Hands Off the Internet” to confuse the issue and give the appearance of grassroots support.

On June 8, the House of Representatives passed the “Communications Opportunity, Promotion and Enhancement Act of 2006,” or COPE Act (H.R. 5252) — a bill that offers no meaningful protections for Net Neutrality. An amendment offered by Rep. Ed Markey (D-Mass.), which would have instituted real Net Neutrality requirements, was defeated by intense industry lobbying.

It now falls to the Senate to save the free and open Internet. Fortunately, Sens. Olympia Snowe (R-Maine) and Byron Dorgan (D-N.D.) have introduced a bipartisan measure, the “Internet Freedom Preservation Act of 2006” (S. 2917), that would provide meaningful protection for Net Neutrality.

On June 28, the Snowe-Dorgan bill was introduced as an amendment to Sen. Ted Stevens’ (R-Alaska) major rewrite of the Telecom Act (S.2686) [now HR.5252]. The committee split down the middle on the measure, casting a tie vote of 11-11.

Though meaningful Net Neutrality protections were not added to Stevens’ bill, the fight for Internet freedom is gaining serious momentum as the bill moves toward the full Senate later this year. Sen. Ron Wyden (D-Ore.) has threatened to place a “hold” on the entire legislation unless it reinstates Net Neutrality and prevents discrimination on the Internet.

Heading into August recess, the Senate Commerce Committee reclassified the Stevens bill as the “Advanced Telecommunications and Opportunities Reform Act” (HR.5252) to speed it to conference committee should it pass.

Call Congress today: No senator can in good conscience vote against Internet freedom and with the telecom cartel.

Isn’t this just a battle between giant corporations?

No. Small business owners benefit from an Internet that allows them to compete directly — not one where they can’t afford the price of entry. Net Neutrality ensures that innovators can start small and dream big about being the next EBay or Google without facing insurmountable hurdles. Without Net Neutrality, startups and entrepreneurs will be muscled out of the marketplace by big corporations that pay for a top spot on the Web.

But Net Neutrality doesn’t just matter to business owners. If Congress turns the Internet over to the telephone and cable giants, everyone who uses the Internet will be affected. Connecting to your office could take longer if you don’t purchase your carrier’s preferred applications. Sending family photos and videos could slow to a crawl. Web pages you always use for online banking, access to health care information, planning a trip, or communicating with friends and family could fall victim to pay-for-speed schemes.

Independent voices and political groups are especially vulnerable. Costs will skyrocket to post and share video and audio clips, silencing bloggers and amplifying the big media companies. Political organizing could be slowed by the handful of dominant Internet providers who ask advocacy groups or candidates to pay a fee to join the “fast lane.”

No. By far the most significant evidence regarding the network owners’ plans to discriminate is their stated intent to do so.

The CEOs of all the largest telecom companies have made clear their intent to build a tiered Internet with faster service for the select few companies willing or able to pay the exorbitant tolls.Network Neutrality advocates are not imagining a doomsday scenario. We are taking the telecom execs at their word.

So far, we’ve only seen the tip of the iceberg. But numerous examples show that without network neutrality requirements, Internet service providers will discriminate against content and competing services they don’t like.

This type of censorship will become the norm unless we act now. Given the chance, these gatekeepers will consistently put their own interests before the public good.

Writing Net Neutrality into law would preserve the freedoms we currently enjoy on the Internet. For all their talk about “deregulation,” the cable and telephone giants don’t want real competition. They want special rules written in their favor.

Either we make rules that ensure an even playing field for everyone, or we have rules that hold the Internet captive to the whims of a few big companies. The Internet has thrived because revolutionary ideas like blogs, Wikipedia or Google could start on a shoestring and attract huge audiences. Without Net Neutrality, the pipeline owners will choose the winners and losers on the Web.

The cable and telephone companies already dominate 98 percent of the broadband access market. And when the network owners start abusing their control of the pipes, there will be nowhere else for consumers to turn.

Who’s part of the SavetheInternet.com Coalition?

The SavetheInternet.com coalition is made up of hundreds of groups from across the political spectrum that are concerned about maintaining a free and open Internet. No corporation or political party is funding our efforts. We simply agree to a statement of principles in support of Internet freedom.

The coalition is being coordinated by Free Press, a national, nonpartisan organization focused on media reform and Internet policy issues. Please complete this brief survey if your group would like to join this broad, bipartisan effort to save the Internet.

Who else supports Net Neutrality?

What can I do to help?

Call your members of Congress today and demand that Net Neutrality be protected.

Encourage groups you’re part of to sign the “Internet Freedom Declaration of 2007”.

Show your support for Internet freedom on your Web site or blog.

Tell your friends about this crucial issue before it’s too late. 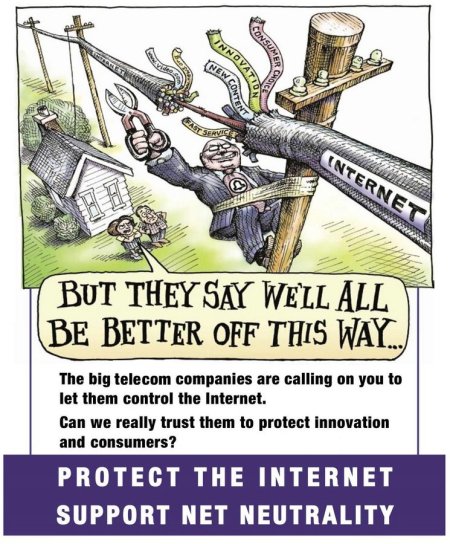 Bill Larson
Bill Larson is  is politically and socially active in the community. Bill is a member of the Friends of Dunbar Cave. You can reach him via telephone at 931-249-0043 or via the email address below.
RELATED ARTICLES
Tech/Science