President Bush says war in Iraq ‘will extend beyond my presidency’

“Iraq will require U.S. political, economic and security engagement that will extend beyond my presidency.” — President Bush

No kidding. It’s obvious that whoever is elected to succeed Bush is being handed a mess, a quagmire that some members of the administration say could require U.S. presence in Iraq for ten years or more. It’s not an idea drawing popular support. 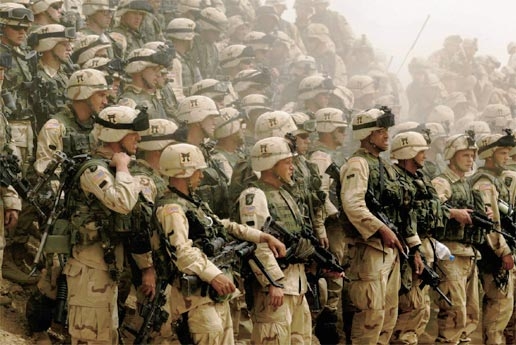 In his speech to the nation tonight, President Bush said he will continue to stay the course without actually saying the words “stay the course.” Despite the fact that he has pledged to return 5,700 troops stateside by Christmas, that still leaves approximately 155,000 troops in Iraq, including 25,000 of the “surge” troops. These troops were already scheduled to return home. The only difference is that they will not be replaced. Do the math.

Augmenting troops by 30,000 may have made a difference in some areas, but the country remains a powder keg with matches allegedly being put the fuse by neighboring countries Iran and Syria. On Monday and Tuesday, before Congressional hearings, General David Petraeus said he wanted to bring home 30,000 troops by July of next year. That’s still just the “surge troops,” not a meaningful decrease in the base number of 130,000.

“The principle guiding my decisions on troop levels in Iraq is ‘return on success’. The more successful we are, the more American troops can return home…I will ensure that our commanders on the ground have the troops and flexibility they need to defeat the enemy.” — President Bush

With presidential popularity at a meager 36%, not much different from the January ’07 numbers, Bush cited successes in Iraq as the reason these troops can come home. But is it enough, even “for now?” What about 2008?

Addressing a public increasingly disenchanted with the war and questioning its cost in dollars and dying, Bush said Iraq “is fighting for its survival,” and noted that the “surge” of US troops has quelled violence by 50% in Iraq and 80% in Baghdad. The “surge” is the 30,000 additional troops the President last January said were required to make a difference in the level of sectarian violence across the country. Bush said:

“In Iraq, an ally of the United States is fighting for its survival. Terrorists and extremists who are at war with us around the world are seeking to topple Iraq’s government, dominate the region, and attack us here at home.”

Bush cited Iraqi gains in job creation and recruitment of Iraqi for police and military forces, but had to concede that the Iraqi government has fallen substantially short of its goals. Bush Continued:

“Americans want our country to be safe, and our troops to begin coming home from Iraq. Yet those of us who believe that success in Iraq is essential to our security, and those who believe we should bring our troops home, have been at odds. Now, because of the measure of success we are seeing in Iraq, we can seeing our troops come home.”

Bush said he has made it clear to Iraq’s leaders that they must step up to the plate and meet the highly-touted legislative benchmarks.

“The principle guiding my decisions on troop levels in Iraq is “return on success”. The more successful we are, the more American troops can return home. And in all we do, I will ensure that our commanders on the ground have the troops and flexibility they need to defeat the enemy.”

“You can’t continue to feed troops into Iraq, break our Army, break our Marines, undermine our influence in the Middle East, and especially in Iraq, and think that you are somehow going to come out at the other end with a so-called victory.”

On Tuesday, Gen. Petraeus told Senators on Capitol Hill that if the situation in Iraq did not see significant improvement, particularly in terms of the Iraqi government taking control, he would be hard pressed to see victory in Iraq and would have to review whether or not it would be advisable or justifiable to continue. Even as he went down that path, those supporting the ongoing effort in Iraq were prodding for possible tie-ins to Iranian backing of the Iraq insurgency, feeding into the growing suspicion that Iran could be the next target of the Bush administration, with weapons as the justification.

Senator and presidential hopeful Hilary Clinton said the President’s announcement of the return of 5,700 troops to the U.S. within three months is “too little too late, and unacceptable to this Congress.”

Earlier today, Ohio Senator Barack Obama, another presidential candidate, announced his own strategic plan to return all troops from Iraq by Spring, 2008.

The President’s speech was his eighth prime time address since the 2003 Iraq invasion.