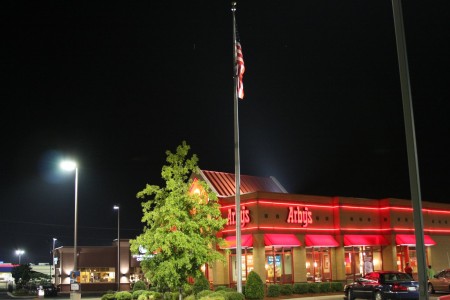 With Memorial Day and Flag Day behind us and July 4th just ahead, the proper display of our national symbol takes center stage. A recent late night driving tour around our city revealed that there are many locations where our national flag is on display after sunset. We commend all who seek to demonstrate this patriotic effort. We found several private residences and business operations which were compliant with the U.S. Flag Code.This means that they have installed spotlighting which, after sunset, clearly illuminates the flag. Above we show an example of proper nighttime illumination of the flag. 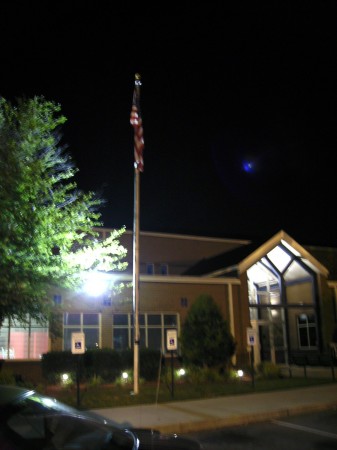 There is no shortage of after dark displays of our national flag, which is commendable. However the nighttime drive tour showed that churches, banks, various business outlets, public monuments, even City Hall, the police department, some fire stations, the 911 Center, the County Jail, the EMS Rescue Station and other enterprises, all seem in violation of the official United States Code rules governing the display of the Flag of the United States after sunset.

Our nation is, itself, a living entity and our flag is to be regarded as a living representation of that entity. Thus, it is never to be dipped in submission to another country’s flag, never to be gathered up or bound, never to be allowed to touch the ground or floor beneath it, never to be embossed on any item which has a temporary existence, is meant to receive trash or is meant to be discarded (such as. napkins, paper plates and cups, ashtrays, etc., or worn as clothing).

§6. Time and occasions for display:

While there is no declared standard of proper illumination, having direct illumination would seem to be an obvious objective of nighttime display. The following pictures showcase examples of failing or poor flag illumination. These photos were shot time-lapsed to insure sufficient exposure to capture a clear image. No other manipulation was used on any of them. The intent here is not to embarrass anyone, but to point out glaring shortcomings of the flag code objective- during hours of darkness, the U.S. Flag is to be properly illuminated. In most instances, the deficiency can be corrected with minimal effort.