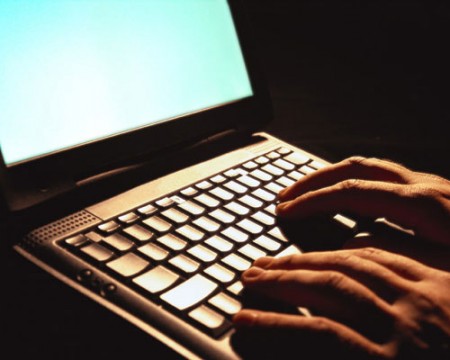 I amuse easily. Which is why I tried hard to hold back a smile, a chuckle (at the irony), when I read of GOP Vice Presidential candidate Sarah Palin’s hacked e-mail.

The intrusiveness of that act, the back-door sneak attack on personal privacy is exactly what this Republican administration is doing to the American people every day: screening e-mails for “trigger”words, tracking travel of ordinary citizens, tapping phone lines,  seeking access to library records … the list of civil liberties and privacy issues invaded and run through the shredder by our government (which is supposed to be of the people, by the people, for the people) is endless. “Government hacking” is the crude term for citizen surveillance in the guise of homeland security.

Because we are “just ordinary people” that’s supposed to make it okay? I don’t think so. As we learned this week, when it comes to internet and computer hacking, rank doesn’t have its privileges, nor does legislative rank and file offer immunity from such attacks.

Perhaps if Palin or John McCain get back a bit of what their party and their President has been dishing out, they may think twice (I doubt it, but there’s always hope) about the ramifications of the laws and the bill of rights that the government and their President are systematically shredding, the undermining of civil liberties and free speech they increasingly enable, propose, and support. That persistent undermining of our basic rights erodes our faith in government, and most certainly in their party in power.

The hacker in question rooting through Palin’s e-mail is not of the government, he’s just a guy. With a business. With a certain set of skills, which he puts to questionable use.  And he hacked Sarah’s e-mail (and face it, hacking isn’t nice, it’s downright nasty), an account that she promptly closed. She’s ticked. Justifiably so. But I do wonder what he found (I haven’t looked), given that she has refused, among other things, to respond to a subpeona for records related to her political/ethical problems in Alaska. Given that she has put herself in the public eye, available for ethical, political and moral dissection under the public microscope, she has opened herself up to scrutiny.

Now granted, I shudder to think that my e-mail could be hacked, that my personal writings could be read by others. Like Sarah, I’d be really ticked. But there’s nothing there that I wouldn’t, or haven’t already said, out loud, in public, often in print.  It’s just how I am. I would, however, be infuriated by the audacity of a stranger peering into my personal business and figuring out that I want another shot at visiting The Three Windows and honoring the grounds of the Goddess (does that make me Wiccan, Pagan maybe?) at Machu Picchu (Sarah’s Wasilla church won’t like me).

Okay, Sarah. Time to look through that Republican lens and know firsthand a bit of what it feels like when our government hacks us.