Banned Books Week:  Celebrating the Freedom to Read is observed during the last week  of September each year.   Observed since 1982, the annual event reminds Americans not to take this precious democratic freedom for granted.

Many bookstores and libraries across the nation join in the celebration with displays and readings of books that have been banned or threatened throughout history.  These include works ranging from the Bible to John Steinbeck’s “Of Mice and Men.” 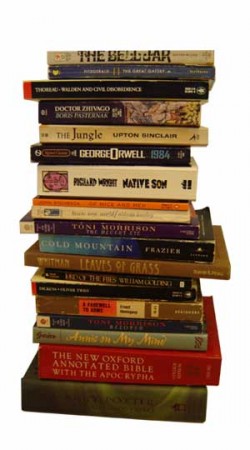 Each year, the American Library Association’s (ALA) Office for Intellectual Freedom receives hundreds of reports on books and other materials that were “challenged” (their removal from school or library shelves was requested). The ALA estimates the number represents only about a quarter of the actual challenges.  “Most Challenged” titles include the popular “Harry Potter” series of fantasy books for children by J.K. Rowling.  The series drew complaints from parents and others who believe the books promote witchcraft to children.

The challenges reported reflect a continuing concern with a wide variety of themes.   Other “Most Challenged” titles include “The Adventures of Huckleberry Finn” by Mark Twain, for its use of language, particularly references to race; “It’s Perfectly Normal,” a sex education book by Robie Harris, for being too explicit, especially for children; and “I Know Why the Caged Bird Sings” by Maya Angelou, for the description of rape she suffered as a child.