Should anyone claim to know G_d’s Mind in this presidential election campaign?

This is an authorized posting of a Sept. 2, 2008 This article is reprinted with authorization from by its author, Rabbi Shmuley Boteach, our guest commentator. With all the political clamor of late about knowing G_d’s plan, and executing his tasks, a moment of reflection just might be beneficial to all of us. 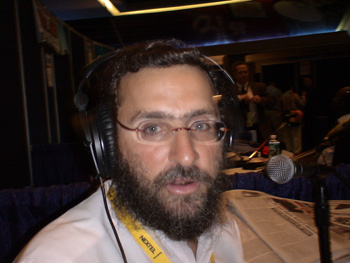 “G-d’s Thoughts on the Presidential Election”

It’s time to play that fun, all-American game, Who is G-d punishing now? Three years ago, when Katrina devastated New Orleans, some on the religious right suggested that the city with the infamous French Quarter was being destroyed for its debauchery and licentiousness. G-d poured fire and brimstone on Sodom in ancient times, and He rained down lightning and broken levies on New Sodom in modern times.

Fast forward three years and here we go again, only this time G-d is punishing innocent men and women in Louisiana for the Republican Convention in Minnesota. According to filmmaker Michael Moore “Gustav is proof that there is a God in heaven. To just have it planned at the same time, that it would actually be on its way to New Orleans for Day One of the Republican convention, up in the Twin Cities, at the top of the Mississippi River.” The theme was echoed by Don Fowler, the South Carolina Democratic Party chairman, who joked that the hurricane was God’s favor to Democrats. But Mr. Fowler will have to forgive some of the residents of New Orleans, both Democrat and Republican alike, if they don’t get the joke.

We Americans are a famously religious people and can therefore be forgiven for sometimes, arrogantly, claiming to know the mind of G-d. But it behooves us to always remember the words of Abraham Lincoln, our most pious president who said, when he was asked whether G-d was fighting on the side of the Union armies, “We trust, sir, that God is on our side. It is more important to know that we are on God’s side.” While none of us can know the mind of G-d, we can know right and wrong based on what all world religions agree G-d has revealed to be moral, holy, and ethical. And, dare I say, even atheists and agnostics agree with the general, universal morality propounded by religion.

Based on this revealed, universal morality, here is a list of what we can assume, based on the Bible, G-d is thinking about the current presidential election.

1. We do not know if G-d wishes Obama to win or lose, but we certainly know that G-d is overjoyed that, perhaps for the first time in our history, tens of millions of Americans are looking beyond skin color and seeing all human beings as equal children of G-d and equally deserving of the highest national office. At the very beginning of the Bible G-d made clear that he created every human being equally in His image, something that it’s taken us Americans several centuries to digest.

2. We don’t know if G-d wishes McCain to win or lose, but we know He shines with favor toward Cindy and John McCain for adopting their youngest daughter, Bridget, who is Bengali, dark-skinned, but has been welcomed as an equal alongside the McCain’s three biological children.

3. America needs leadership, and people must run for President and be away from their families. But G-d instituted a Sabbath day of rest, even in the midst of the toughest contests, to be with family and focus on what is even more important that becoming President. This is especially true for people like Barack Obama and Sarah Palin, both of whom have young children whose development cannot be put on hold until after an election. In this sense, both campaigns can learn from the example of Joe Lieberman who, while running for the Vice-Presidency of the United States in 2000, refused to campaign every Saturday and was with family instead.

4. G-d loves unity among his children and hates division. The first human sin was the fratricidal conflict between Cain and Abel with the horrific result of one becoming a murderer and the other a dead victim. Likewise, the Bible is clear that slander and character assassination are forbidden by divine decree. Attack ads, therefore, however effective, are unG-dly and unjust. (Emphasis added.)

5. G-d loves the penitent. He shows special grace to those who are courageous enough to confess their sins and correct previous error by trying to act better. We should therefore be forgiving both of Obama’s admission to prior drug use and McCain’s confession to moral lapses in his first marriage. America often punishes its leaders for their shortcomings. This is wrong. Righteousness in G-d’s eyes is defined not as perfection but as engaging in the struggle to try and be better. So long as our leaders take responsibility for their actions and commit themselves to more righteous action, we should be inspired by their courage and commitment.

6. G-d delights in stories of redemption and joyfulness. He repeatedly commands us to be happy and rise above slights and resentment. This might explain why He has shined especially brightly on Obama and McCain. The former is a black man, abandoned by his father, who after educating himself in the best Universities chose to work with the poor and downtrodden. The latter is a man who lived through hell for five-and-a-half years but rose above his horrific experiences of being tortured as a POW to devote himself to inspirational public work rather than indulging in brokenness and bitterness.

7. G-d does not mind that Barack Obama made millions of dollars on his book or that John McCain has seven homes – that is, so long as both are charitable in pocket and in deed. Those making money are required to give at least ten percent of their earnings to charity and so long as they commit a significant percentage of their money to the poor, we should applaud them for their industry.

8. G-d created the world with words, “Let there be light,” etc. He demands that language likewise be used for constructive and holy purposes. G-d’s favor therefore shines brightly on Barack Obama’s enormous capacity for using words to inspire and uplift. But the Bible makes it equally clear that G-d hates evil and those who use language to sow discord between His children. He therefore abjures us to forcefully oppose people like Mahmoud Ahmedenijad who has repeatedly threatened to ‘wipe Israel off the map.’ G-d calls upon all men of justice – especially those in positions of leadership – to neutralize evil before its words are turned into irrevocable action.

Rabbi Shmuley Boteach hosts a daily national radio show on “Oprah and Friends.” He will hosting an all day seminar at Radio City Music Hall on October 12. www.shmuley.com