“Punishment Park” was directed and written by Peter Watkins circa 1971. Filmed in a documentary style, it is just under 90 minutes. This movie came recommended to me by a friend who has an eye for eclectic movies.

As with most movie suggestions, I checked out the trailer before I watched the movie. The movie trailer I found on YouTube was intriguing, shocking, and contained very little details about the movie’s content. I have to admit, my curiosity was peaked, and I went about renting the movie, which is available on NetFlix. The following is the narration of the trailer:

“Under the provision under Title II of the 1950 Internal Security Act, also known as the McCarren Act, the president of the United State of America is still authorized without further approval by Congress to determine an event of insurrection within the United States and to declare the existence of an internal security emergency. The resident is then authorized to apprehend and detain each person as to whom there is reasonable ground to believe they probably will engage in certain future acts of sabotage.” 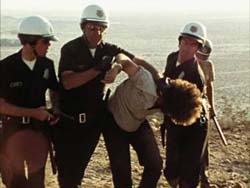 This narrative is played on top of surreal images of graphic interrogations and armed police chasing people in the desert. I have to admit, my curiosity was peaked, and I went about renting the movie, which is available on NetFlix. The trailer is linked at the end of the review.

The movie is aptly self-described as “A controversial and relentless depiction of suppression and brutality.” The brutality in this movie is not graphic, as with the Saw -type movies, but graphic for its realism. Even though it was filmed in 1971 and deals with the counter-culture of the Vietnam protest era, it is eerily pertinent today. It was reminiscent of Network, one of my favorite movies, in the sense that it seems ironically semi-prophetical. The dialogue is excellent. It is crisp, well thought out, and structured like a 12 round Heavy-weight Championship boxing match. I cannot express just how well written this movie is. It contains very strong language, but the language enhances the realism of the movie and pulls the watchers emotions like a bungee cord. 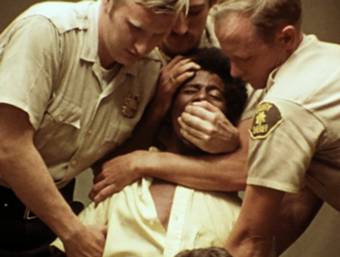 So far, I have avoided discussing the content of the movie, partly, because when I watched it, I had no idea what to expect, and that enhanced the viewing. So read on with caution. The jest is that the president has declared martial law and is rounding up dissenters. The cast of dissenters are poets, community organizers, draft dodgers, activists, musicians, pacifists, etc. These dissenters are “on trial” because their actions have been deemed anti-American by the establishment. The trials occur in a tent in the California desert presided over by a cast of government officials. Upon the conclusion of these Kangaroo Courts, the defendants are given the decision to take years in a federal prison or serve four days at Punishment Park. All members of the first group choose four days at Punishment Park.

The director guides us through the movie with a creative and smart set up. At the beginning you see one group of dissenters being sentenced, as another arrives to be tried. As we watch the first group endure in Punishment Park, we watch the second group be tried. The visuals and dialogue jolt the viewer as the director seamlessly jumps back and forth between the two groups, both fighting for their lives.

After watching the movie, I did some internet snacking and found some viewers thought the film was an actual documentary. The documentary style adds to the suspense. After hearing a heated exchange in one of the courtroom scenes, I found myself dwelling on it for several minutes before realizing I wasn’t watching the movie. At times, I was sitting on the edge of the couch, muscles tensed. Others times deeply saddened. When the movie was over, I felt uncomfortable, disgusted, sad, and yet oddly empowered. I have not reconciled the feeling of empowerment that I had. I think it comes from the very well written dialogue, the dissenters anger and bewilderment is written with a clarity of a bell and the intensity nuclear bomb.

If you watch the movie, I would really enjoy hearing what you thought…