Water. Seventy percent of the Earth’s surface is covered with it. But in spite of the 326 million cubic miles of water on Earth, many people do not have access to fresh, clean water.

The basic water requirement (BWR) describes the amount of water a person needs per day for domestic purposes: water for drinking, human hygiene, sanitation services and food preparation. The minimum recommended BWR per person is 50 liters—or a little more than 13 gallons. Unfortunately 20 percent of the world’s population only has around 5 liters—or a little more than 1 gallon—each day. More than 1 billion people do not have access to clean drinking water. 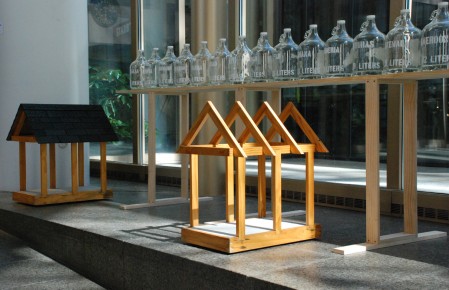 In response to this global crisis, community artist and APSU professor of art, Gregg Schlanger, has contributed an installation for the Green Light exhibit, now on display at the Bank of America Plaza in Charlotte, N.C.

All works in the Green Light exhibit focus on environmental issues. The bank is sponsoring the show in acknowledgement of its efforts to maintain a more environmentally friendly business and in commemoration of receiving Energy Star Rating of 91. The work is accessible by the public through November 2009.

He has received many awards including Sponsorship by the New York Foundation for the Arts, Israel-Tennessee Visual Artist Exchange Project Fellowship, USIA Arts America Grant and New Forms Regional Initiative Grant from the National Endowment for the Arts.

Schlanger works primarily in installations and community public art. He is interested in exploring the potential of creating a better “sense of place,” which he hopes will lead others to a deeper respect for the places and the environment. Schlanger believes this can happen through community involvement and the educational nature inherent to many aspects of his work. 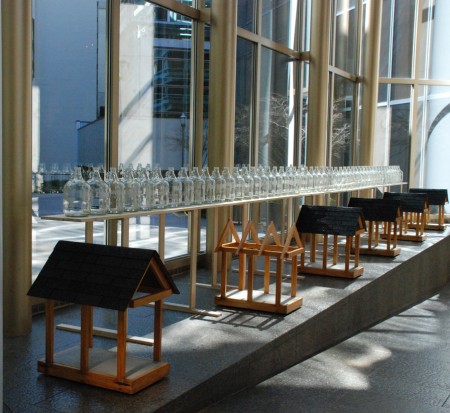 Schlanger’s installation is a continuation of a work he created in Potsdam, Germany. There are 48 one-gallon glass bottles on displayed on a wooden table. Each bottle represents a different country and indicates the amount of water used per person per day in each country. The installation also contains a simple three-dimensional line drawing of a house, which is used to represent the domestic use of water around the world.

“It is my intention to bring awareness about this global (water) crisis through this piece,” says Schlanger. “As a global community, we should guarantee that every person has access and the right to at least 50 liters of clean water every day.”

The country with the poorest access to water is Somalia with less than 1 liter per person per day. Ethiopia, Chad, Sierra Leone and Haiti are all countries where people have less than 15 liters water per day to use for their basic needs. In contrast, Iceland leads the European countries with the average person using 507 liters per day. The U.S., New Zealand and Canada are among countries with the highest water usages. Each person in the U.S. uses an average of 598 liters of water per day.

Water is one of the key ingredients for life to exist. The lack of proper drinking water is blamed for the deaths of 5,000 children every day. In certain parts of Africa, women will spend hours each day hunting for water. Meanwhile, modernized nations waste water by the hundreds of gallons.

Some Facts about Water: